We plan to update the game to version 1.0.44: “Ninja Attack” on around [UTC 2021/03/10]. Before the update, you can download data in advance via events to earn nice rewards. We apologize for any inconvenience this might cause and will send you a compensation reward once the update is complete. 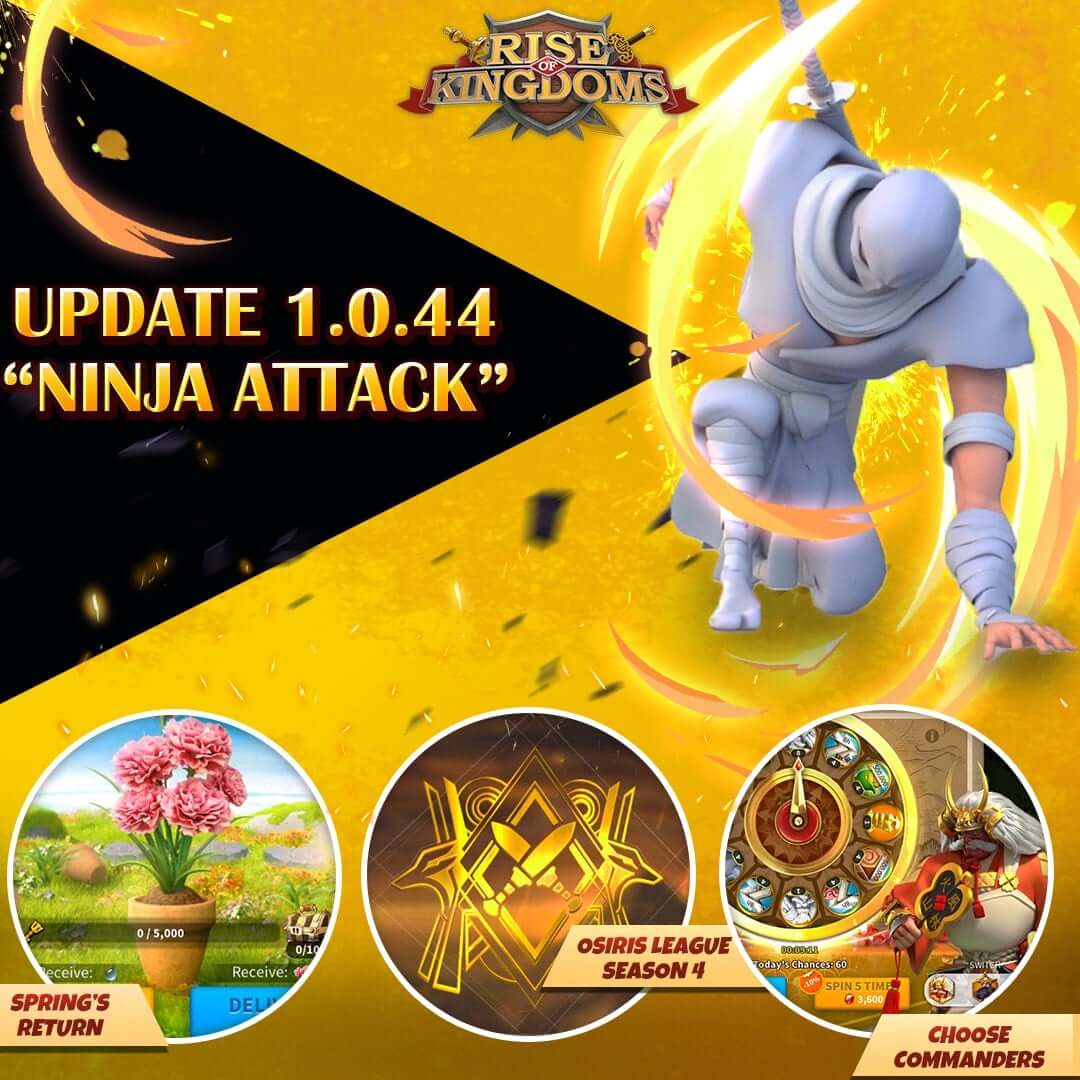 The heir of the Hayabusa clan rises again! What secrets are the ninjas keeping…? A limited-time Rise of Kingdoms and NINJA GAIDEN 3: Razor’s Edge crossover event:

1) Assembling Scrolls: Collect scattered fragments and put them together to form the Hayabusa clan’s secret scrolls, and at the same time earn great rewards such as avatar frames and name plaques!

2) “Dragon Ninja” and “Shinobi of the Shadows” bundles available for a limited time! Buy them to get lots of rare rewards no longer in circulation!

Since putting the Season of Conquest online, we have received lots of suggestions and feedback from Governors. We have tried and tested many things, and continued to listen to a wealth of voices from the RoK community.

In this version, we have decided to reduce crystal buffs during the Season of Conquest, add more ways to gain crystals, and increase the number of crystals earned. Specific details are as follows:

The following changes will take effect for the new Seasons of Conquest, as well as those currently in progress when the update comes online:

1) Significantly increased the number of crystals dropped by barbarians and barbarian forts.

2) Increased the number of crystals awarded for completing Bastion quests.

3) Reduced the difficulty of Bastion quests.

5) Reduced the power of Season of Conquest barbarians, as well as the action point cost of attacking them.

6) The strategic view of the world map will display the location of Bastions.

7) Reduced the duration of Kahar the Hidden to 30 minutes, and that of Kahar’s Treasure to 10 minutes.

The following changes will only take effect in Seasons of Conquest which begin after the update takes effect:

1) Reworked the combat-related buffs which can be obtained at the crystal research center.

3) Greatly reduced the time it takes to upgrade the crystal mine and crystal research center.

4) Greatly reduced the time it takes to research crystal technologies.

5) Added “Season Quests” which can be completed to earn a large number of speedup items.

6) Added a lot of achievements, which grant “Crystal Chests” when unlocked. These chests can be used in the next Season of Conquest to gain crystals.

7) At the same time, for any kingdom that begins the next Season of Conquest after the update, 1.5 million crystals will be given to each Governor to help them get off to a good start.

We have noticed that many Governors feel the Lucerne Scrolls are too difficult and take too long. We have thus decided to decrease the difficulty of Lucerne Scrolls quests, and to make each event shorter. Specific adjustments are as follows:

5) You will now still be able to purchase “The Archaeologist” after purchasing “Treasure Hunter”.

1) We have noticed a number of issues with the “Kingdoms List” and “Lost Kingdom” displays. Many Governors have difficulty finding the Lost Kingdom. These issues will be resolved some time after this update. We have designed new screens for Kingdoms List and Lost Kingdom, and have renumbered Lost Kingdom servers to be more intuitive.

2) In order to enable more Governors to recruit powerful late-stage commanders, and in order to promote a more balanced gaming environment, we will be adjusting the pace of commander acquisition after the end of Season 3. Now once a kingdom finishes Lost Kingdom Season 3 (“Light and Darkness”), they can choose which commander’s sculptures they will receive as rewards in the following “Mightiest Governor” and “Wheel of Fortune” events.

3) At the same time, we will be adding new ways to acquire commanders so that Governors can access as wide an array of commanders as soon as they enter Season of Conquest. After a kingdom enters Season of Conquest, a new Legendary Tavern event will take place, in which Governors have a chance to gain sculptures for any commander their kingdom can already access. For specific details and schedules, please see the event page.

4) The size of teams in the “Ceroli Crisis” and “Ian’s Ballads” scenario battles will be increased from 4  to 5 , and the difficulty of bosses will be adjusted accordingly.

5) Resources protected by storehouses can no longer be transported.

6) As the dust settles on the battlefields of Osiris League Season 3, Season 4 is ready to begin! With brand-new rules, more pre-match coverage, and even more in-depth statistical analysis, get ready for the greatest showdown ever! Stay tuned!