Complete guide to Trajan in Rise of Kingdoms. Let’s take an in-depth quick look at his skills, talent trees, and the other tips for making the most of him!

Note: Trajan is only available via Wheel of Fortune for Kingdoms which have been opened for more than 300 days.

Trajan is a commander focused on PVP open-field combat.

One of his main strengths is fighting outside of the Alliance territory, thanks to his skill “Expanding Borders” which increases the health of his troops while they are outside their territory.

“Trajan’s Column” is a unique skill of its kind in Rise of Kingdoms. It has a strong buff for Rage regeneration and Damage skill, in addition to having a damage effect on the its enemy (This skill is improved further by the Expertise skill)

“Great Expedition” is his passive skill that specializes in the use of mixed troops since it increases his troop capacity by 10% and when he has 3 or more types of units in the army. It increases the damage his skill causes on the enemy. and at the same time applies a strong debuff to increase this type of damage.

Deals direct damage to the target. Troops led by this commander and nearby allied troops gain bonus skill damage and 15 additional rage per second for 3 seconds. However, at the same time, incoming damage is increased by 25% for 3 seconds.

Increases the defense of troops led by this commander. Troops also get HP bonus when they are not in the Alliance territory!

Increase troop capacity of the Trajan’s dispatch. When there are 3 or more different types of units in the army, they deal additional direct damage to the current target when using an active skill and increase the damage dealt to the target by 4 sec.

Normal attacks offers a charge bonus to the unit defense for 10 seconds. The duration resets when a new charge occurs. Can stack up to 10 times. The effect can only occur once every 8 sec.

Deals direct damage to the target (Damage Factor 400). Troops led by this commander and nearby allied troops gain +30% bonus skill damage and 50 rage per second for 3 seconds. At the same time, damage taken is increased by 25% for 3 seconds. 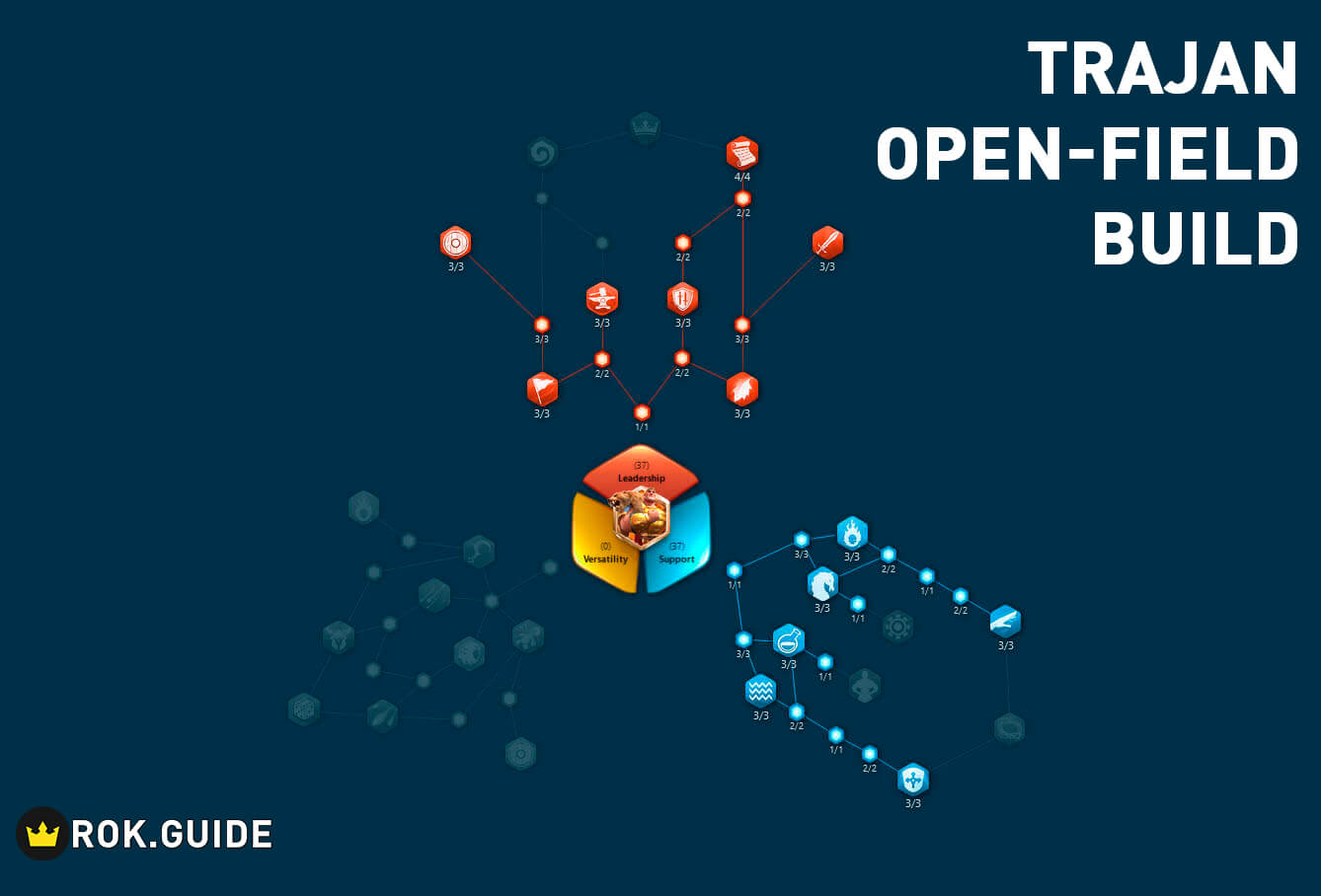 Trajan is a great commander for open-field.

However, something we recommend is using him as the secondary commander.

His talents are very varied and focus on the versatility of this commander as a support or specialist in leading mixed troops, something that In advanced or higher power kingdoms it is not highly recommended against commanders focused on a single type of units and specialized in causing great impact in open-field, regardless of how we use it both primary and secondary.

Trajan is a great commander however, very versatile and powerful.

Any commander who has a strong buff and debuff application will be his best commander pairing options.