On October 29th, the RoK development team invited a number of governors to Shenzhen for the inaugural Developer Roundtable. Unlike other offline events, the Roundtable aims to create a space for governors to talk with the RoK team face-to-face, not only to learn more about new content in the pipeline but also to directly convey their issues with and suggestions for the game.

During the event, producer Da He introduced new RoK content currently under development and had an in-depth discussion with the invited governors about a number of issues.

Below, we’ve compiled a recap of what was discussed at the Developer Roundtable. If you have anything you’d like to add to the conversation, we’d love to hear your input.

Please note that all content mentioned during the event is under development, and as such is subject to change. Please refer only to official announcements for exact update content/release dates.

One of the new gameplay features we’re developing is the “auxiliary commander” mechanic. The basic idea behind it is to provide you with more freedom to customize the skills of your favorite commanders. We’ve designed the gameplay aspects of the mechanic and currently plan to include it in next year’s new stories.

The concept is similar to the Season of Conquest story “Heroic Anthem”, where you can acquire equipable “support skills” by completing bastion quests.

Like in Heroic Anthem, this mechanic will let you use commanders you own as “auxiliary commanders”, allowing you to take one of their passive skills and equip it to another commander. We’re also considering increasing the number of equipable support skills in Heroic Anthem from two to three.

This mechanic is currently undergoing internal testing and is subject to change.

We’re also experimenting with the direction of GvE gameplay, where multiple governors can challenge bosses on the world map.

The Ark of Osiris event has undergone very few changes since its launch, barring the occasional balance adjustments. The current meta focuses mostly on competing for the Ark, gathering, and stronghold combat. In order to enhance the strategic element of Ark of Osiris, we’re currently working on the following changes:

In addition, we’re considering adding a fog system similar to Champions of Olympia, in order to make visibility/scouting more important and allow for a wider range of tactics.

We’re also trying to make some major upgrades to the underlying combat framework, in order to better incorporate ranged combat and blocking into the game.

In the past, large battles in RoK mostly involved both sides amassing all their Troops in one area, then hitting each other until one side won. This could get very repetitive and tiresome. We’re looking to get away from this style of combat and “expand the front line” of RoK battles.

Likewise, in the future, we want to provide a more in-depth and historical battlefield experience. For example, adding in the field fortifications and barricades used in many real-life battles to block the enemy’s advance, slow down their movement, and buy time for the defenders to organize themselves. In a similar vein, walls would serve as a costlier kind of barrier, which may necessitate attackers to use siege weapons like mangonels to destroy the walls and force the defenders into a pitched battle.

We will be making a series of changes to how new commanders are added, starting with adjusting events.

In the Wheel of Fortune event, in addition to the existing leadership-type commanders, you will be able to select new ranged commanders.

In addition, whenever a new ranged commander is added, they will be accompanied by a ranged-combat-themed event that will allow you to experience ranged combat for yourself. By taking part in these events you will be able to acquire other ranged commanders. We hope you’ll enjoy them.

Over the past year in the China server, we released a new generation of commanders every 3 months. Some governors have reported to us that this creates too much time pressure to upgrade commanders before new ones come out.

As such, starting from the 6th gen cavalry commander update, we will be extending the interval between new commander generations to around 7 months. The schedule of commander-related events (like The Mightiest Governor and Wheel of Fortune) will not change. (Specific to the China server)

Q: When will the 7th-gen infantry commanders come out? How powerful will they be? What are your plans for leadership commanders going forward?

We plan on releasing the 7th generation of infantry commanders in late December, or January of next year at the latest. One will focus on field battles, the other on sieges. Their strength will be on par with other 7th gen commanders and will be more than enough for all your infantry needs.

Q: Offseason KvK content is boring. Champions of Olympia and Tempest Clash as they are now aren’t fun. Can we get more off-season events and activities?

A: Firstly, we are aware of the issues with game modes like Champions of Olympia, the current state of which does not match our intended design. We are considering reworking the gameplay, including changes in the matching system, rewards, and other aspects.

In addition to reworking old events, we will continue adding new events and activities to get you all through the “drought” period, so stay tuned for those.

Q: Matchmaking for KvK content is not good, with frequent collusion and match-fixing between combatants. Will you consider matching kingdoms by victories/total points? Also, can kingdoms that have just unlocked Seasons of Conquest receive “newbie protection”?

A: We’re aware of this issue, though we can’t give a definitive answer to the first question just yet. But our planning team will be setting up a task group to investigate and address collusion and match-fixing. We’ll publish more details once we’ve confirmed our plans.

In addition, for kingdoms that’ve just unlocked the Season of Conquest, we will be adjusting the matchmaking algorithm to keep them separated from kingdoms that have participated in multiple Conquests. This feature is currently being tested and we believe it should be going online soon.

Q: The “fortress stacking” tactic (i.e. when an alliance builds multiple forts around a chokepoint) is overpowered. Will you consider changing how this mechanic works?

A: We’ve discussed modifying this mechanic, but in the process of doing so have found that changing this may be more complicated than we expected. As such we can’t definitively say we’ll be rolling out this change at a certain time, but if we plan on making this change we will be sure to let the community know.

Q: In KvK gameplay, non-combat alliances tend to have a worse experience. What will you do to make them feel more involved?

A: We’ve already observed governors organizing their own interesting activities during community events. We’re also considering adding large-scale online events that will require the participation of all alliances to encourage non-combat alliances to participate more in inter-alliance activities.

We’re also developing more story subsystems, like the Seasonal Strategies system planned for the King of the Nile story, which we hope will allow governors in non-combat alliances to contribute more to the power of their kingdoms.

Q: Will there be more game merch, like figurines, alliance/player-customized gifts, etc?

A: Yes, more merch is part of our current production plan. We plan on adding more figurines/models (e.g. commander figurines, models of certain castle skins, etc) and a means of customizing certain merch. Once we have more information, we’ll make an announcement.

Q: There is constantly new KvK content coming out, but older events like Ark of Osiris basically haven’t changed. Since you have all these new game mechanics, will you ever add them to older events?

A: Yes, we are considering it, and we believe that adding new mechanics to older events may breathe new life into them. For example, with Ark of Osiris, we may consider adding mechanics like “capture multiple strongholds to earn buffs” to enhance the strategic elements of the event.

A: When defending a city, there is a limit to how much normal/counterattack damage each side can inflict in a round. This limit is designed to make sieges more balanced (i.e. preventing attackers from being wiped in a single round). The result, however, is that city defenders (who mostly rely on normal and counterattack damage) are at somewhat of a disadvantage.

After taking a comprehensive look at the combat system, however, we’ve found that the core reason for the weakness of garrisons is the relative lack of new mixed-troop garrison commanders and the obvious difference in power between older and newer commanders.

As such, our current plan to resolve the issue of mixed-troop garrisons taking too much damage is by adding new garrison-type commanders and equipment.

During the Developer Roundtable, our governors provided us with tons of helpful suggestions and feedback, such as “a button to send out 7 troops at once”, “the new skins don’t look good”, “not enough community guides”, “promote the Osiris League more”, “rework leadership commanders”, and so much more that we can’t list them all here. We’ll be carefully considering all the suggestions we received at the event, and some of them will likely be incorporated into the game in the future.

This Developer Roundtable was a huge help to the entire Rise of Kingdoms team. Not only did we receive valuable advice, but the event also served as a helpful temperature check for the state of our player base. We’re already preparing for another Roundtable, to be held in another city. We’re hoping that through these Roundtables we’ll be able to get more perspectives, receive more suggestions, and make RoK a better game for all. 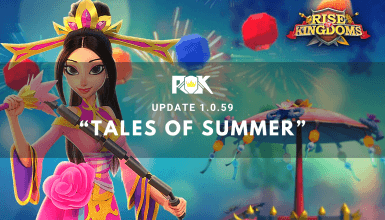