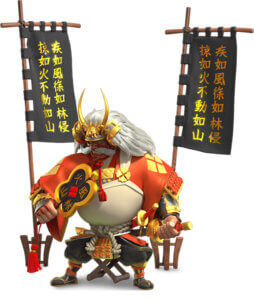 Japan / The Tiger of Kai

The first skill of Takeda Shingen does not do skill damage.

So we’ve got an obvious pairing right here! That you could do with Takeda Shingen is the secondary for Attila. It would be pretty sweet!

You debuff an enemy, single target, for 4 seconds, which is a pretty long time.

This effect can only trigger once every two seconds so there is a limit to how frequently this can trigger. This is because this skill is so effective when you’re swarming the enemies, especially in Ark of Osiris, it looks like every single army that’s attacking has a chance to trigger this. Because if you’re swarming a target with 10 armies, you’ll basically get a hundred percent uptime on this.

This is going to be really good in Ark of Osiris and there’s gonna be some serious implications!

A 40% attack bonus is absolutely massive! This is an extremely interesting skill!

It seems like this is all about chasing down targets to death.

This is a serious massive skill comparing to the other Legendary skills.

So that’s a total of 1,000 healing factor spread out over time.

Frederick has a 10% chance to trigger a heal for 1,000 but it can only trigger every 5 seconds. It’s not as good as Takeda’s skill, not even close to what we’ve got here!

A cavalry defense bonus of 40% is another crazy bonus Takeda Shingen provides.

Anti-swarm technology can be in the form of elevating your own counter-attack where now you’re doing more damage to everybody that’s hitting you. But in this case, we’re seeing the opposite, which is decreasing the normal attack damage you take from all those armies that are hitting you. Very great skill!

Attila: I think these two commanders pairing up together is one of the best paring for Takeda. Attila as the primary, Takeda as the secondary. Takeda’s Mobility tree is fine for getting around but we’re talking about using him for huge war or Ark of Osiris to smash structures!

He’s not actually reducing the amount of skill damage that you deal so I actually give the desire to have his first skill to go off frequently.

It is great to pair Taketa as the secondary with either Saladin or Genghis Khan as the primary. That would be a phenomenal choice and you’d get a ton of value with those commanders.

With saladin being primary, you could go in and pick up Elixir, which is going to give you the a better healing factor. Instead of 1000, it effectively gives you a healing factor of 1090, which is very worth it! 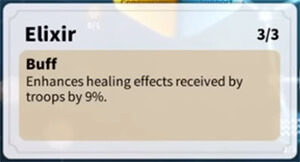 You could also pick up counterattack so that healed troops will have their attack increased by 9% for 3 seconds. That’s great! 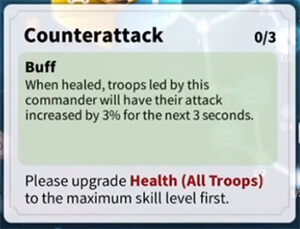