Ramesses II & Why He is Great for F2P Players!

Artemisia I and Ramesses II are the 2 commanders, which are introduced in Rise of Kingdoms with the latest update called Spring Has Sprung.

First thought? Being a versatility commander is enough for you to invest in him. Just like Alexander the Great before for example!. 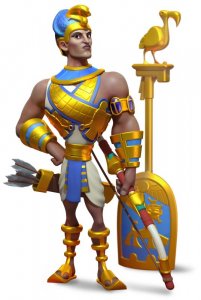 Other | Favored by Gods 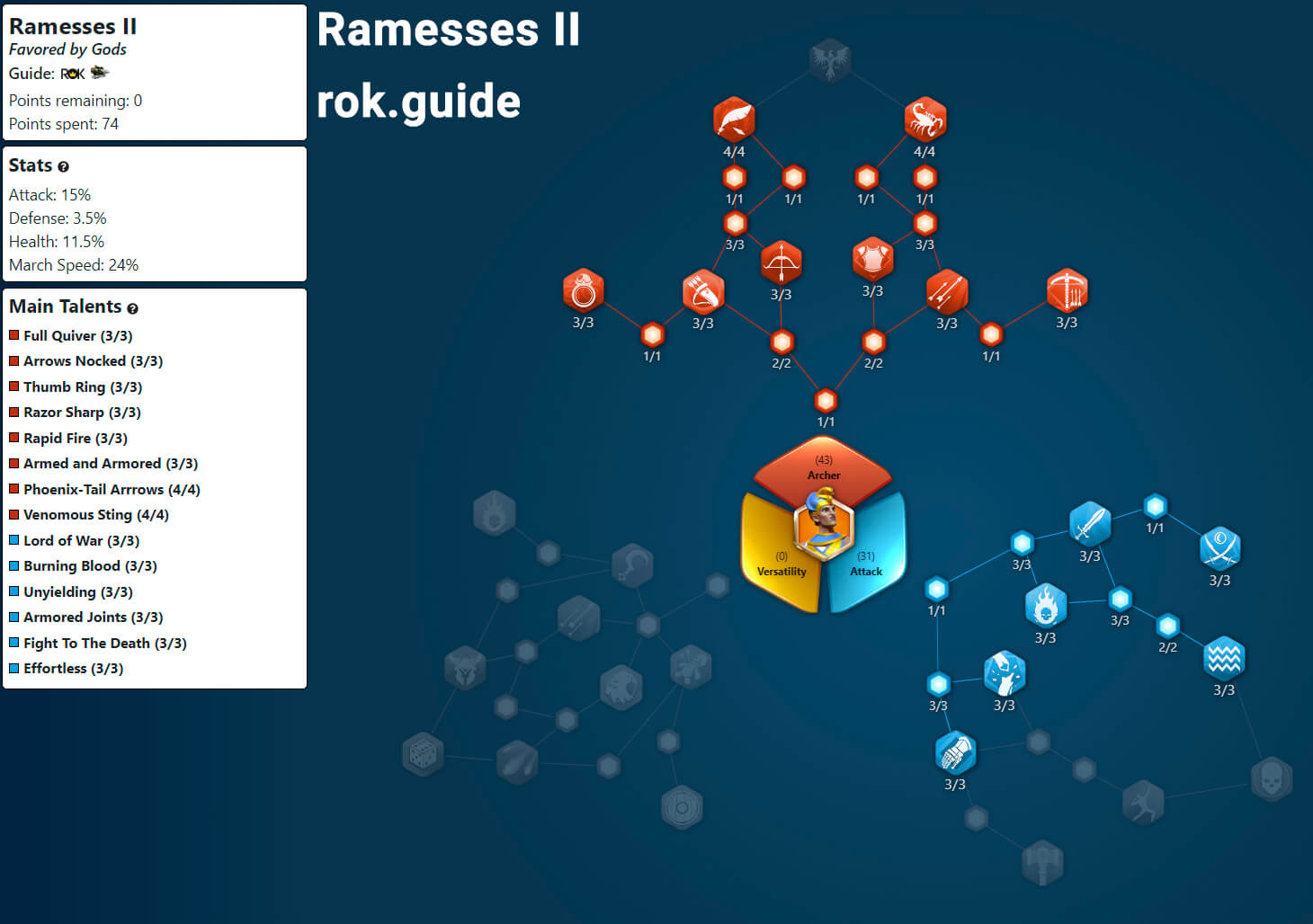 Using this build, we have:

The defense is quite low for Ramesses II with this talent tree but with the skills of him, you can get some extra defense bonus. The marching speed is 24% which is going to help you on the battlefield when you are moving around and will not be chased down with ease by any opponent.

Fight to the Death: Increasing all damage meaning including your skill damage, your normal attack, your counter-attack by 6%.

You’re also going to increase all damage taken by 3%. We have another additional 15% attack from this Ramesses II talent build.

We also have counter-attack damage increased by 1.5% from Unyielding and also we have the Armored Joints which reduces all damage taken by 1.5% so pretty much we’re already cutting this on half. Technically we are only taking more 1.5% damage.

Effortless: All damage, including the skills, will be amplified by 2.5% every 10s at a maximum of 10%. Imagine that if you have a secondary like YSG, you will gain tons of benefits.

The reason why we built it with a high attack because the skills of Ramesses are also complementing high attack, meaning we are definitely going to eliminate our opponents a lot faster.

He increases the damage of archers by 100%, that’s a lot! Combining with Ramesses’s attack, this is something really deadly.

We also have the rage restoration by 100 and then we have a 50% skill damage bonus from the 4th skill.

Imagine the power of this combo with combining all of the YSG skills with the talent tree we have built above.

Edward of Woodstock might be slightly obsolete if Ramsay is your new primary commander, but he is still very viable at the secondary slot.

Edward of Woodstock has buff for your Archer health by 30%. It’s also going to give you skill damage bonus of 25% and damage to infantry by 5%. The 4th skill increases the attack bonus by 40% when there’s 70% strength and decreases defense of the enemies. This is going to complement even better with Ramesses.

In addition, he increases the normal attack and counter-attack by 50% for two seconds, helping Ramesses II take down the opponents like crazy.

You have an additional chance to gain 100 rage so you can cast Ramsey’s first skill more frequently.

He has a 10% attack bonus and also a marching speed bonus for Archers.

If you are getting swarm, you have a higher chance of increasing your troop attack bonus to an additional 40% (from the Army of Amun skill) which is too high.

If you want an AoE commander in the epic level for archers, Kusunoki would be your best bet!

Why Ramesses II is Great for Free-to-play Players

I have some good news for you if you are in love with Ramesses! He is working very well at skill 5-1-1-1. If you have enough sculptures, you can get him to 5-5-1-1 for higher damage output.

Let’s take a look to see why Ramesses II is a good fighter on the battlefield for all free players.

First thing is, you shouldn’t try to compare yourselves with other P2W players since they are spending a lot of money on the game. Having a decent working commander is enough to fully enjoy Rise of Kingdoms every day!

Ramesses and other Versatility commanders are very unique and I always love saying this. Their skills are useful on the battlefield in almost any situation.

Comparing to Garrison, Conquering or Gathering commanders, it’s totally unwise to not invest in a Versatility commander, even when it’s El Cid (He was very great in the past and I believe that he will have some great pairings soon in the future).

Let’s start with Ramesses first and see why he is totally viable for all free players to use on the battlefield.

The first thing you might already know, it’s to max out the first commander’s skill whenever you start leveling them up. This is especially crucial if it’s the commander who fights for you on the field (with the exception of Gathering commander).

Maxing out Ramesses first skill will improve the battle capabilities for you and all of your allies. He will be able to deal 800 damage factor at first and for 2 seconds, he will make the targets a lot weaker by reducing their defense. This is a perfect opportunity for your allies to swarm the targets and finish them off.

This is why it’s extremely important to max the first skill of him. This skill is enough for all F2P players to have a vital role on the battlefield.

This skill grants a passive buff which increases Archer’s attack damage by 20% at level 1. This only works while you are on the map. It doesn’t work when you are in any structure.

To be honest, 20% at level 1 is pretty massive comparing to other Versatility commanders such as Alexander the Great (only 10% at level 1).

This skill only works when you have only Archer units in your army.

He reduces all incoming skill damage by 10%.  And remember that skill damage is the main source of damage of the game.

He also has a 10% chance of increasing the troops attack by 20% and march speed by 20% for 3 seconds when attacking the enemies.

Regardless of how you enter the battle, this skill definitely helps you in every single game scenario. Whether it’s 1 vs 1, a big war, etc.

If you are being targeted by many enemies, you always have the chance to escape since you have 20% march speed bonus.

As you progress further in the game, you will improve his skills further of course.

This is something many players love about the new commander. We always wanted to have an archer commander with healing abilities. And Ramesses is the very one.

However, for free players, this skill is not that great because it has only 200 healing factor at level 1, which is not too much. The amazing thing here is that he increases his defense by 20% more and this is extremely helpful for all Archer units since the only thing they need is more tanky!

Ramesses is a great Rise of Kingdoms commander even when he is at only 5-1-1-1 due to a lot of great skills he provides.

The key thing you want to remember here is that he reduces the defense of the enemies, opening a huge opportunity for all allies to finish off the opponents. He also increases the troop’s defense and decreases the incoming skill damage.