Moctezuma I – Eagle of the Aztecs

Complete guide to Moctezuma I in Rise of Kingdoms. Let’s take an in-depth quick look at his skills, talent trees, and the other tips for making the most of him!

Other | Eagle of the Aztecs

Note: Moctezuma I is only available via the Mightiest Governor Event for Kingdoms which have been opened for more than 300 days.

Moctezuma I is the perfect commander to destroy or assault any type of PVE structures in KVK or the Lost Kingdom, Camps, Crusader Fortresses, Shrines, Hieron, Pass, Circles, Ziggurat, etc.

Everything will be conquered much easier by using this commander.

“Land of the Prickly” an impressive active skill that reduces your enemy’s counterattack by 15%.

“Flower War” is a superb skill to face against neutral units. It increases the damage to this type of unit by 50%, in addition to taking a great XP gain and reducing the healing of the target by another 50%. This is undoubtedly an impressive ability to attack structures garrisoned by PVE units.

Moctezuma I has a very good healing factor, thanks to his skill “Jaguar Warrior“, which also increases the speed of the troops and increases their attack as well.

As a commander specialized in leading PVE Rally, “Triple Alliance” increases the capacity of troops when this commander launches a rally attack, it also causes a damage effect towards the enemies when he receives damage per skill. This skill is improved by his expertise in an absolute way.

Land of the Prickly

Deals direct damage to the current target and reduces its counterattack damage for 4 sec.

Troops led by this commander deal more damage to barbarians and neutral units. Both commanders gain extra experience. Attacks on barbarians have a 10% chance to reduce the target’s health for 3 seconds. The effect can only occur once every 3 seconds.

Troops led by Moctezuma I receive a bonus to march speed and to attack. If the target has HP reduction debuff, troops are healed when attacking with normal attacks. The effect can only occur once every 5 sec.

When this commander starts a rally, the rally capacity is increased. When Moctezuma’s troops take damage from skills, they immediately deal direct damage to the attacker. The effect can only occur once every 5 sec.

When this commander launches a rally attack, the capacity of the rally is increased by 10%. When Moctezuma’s troops take damage from skills, they immediately deal direct damage to the attacker (Damage Factor 800). The effect can only occur once every 4 sec.

Best Talent Trees for Moctezuma I 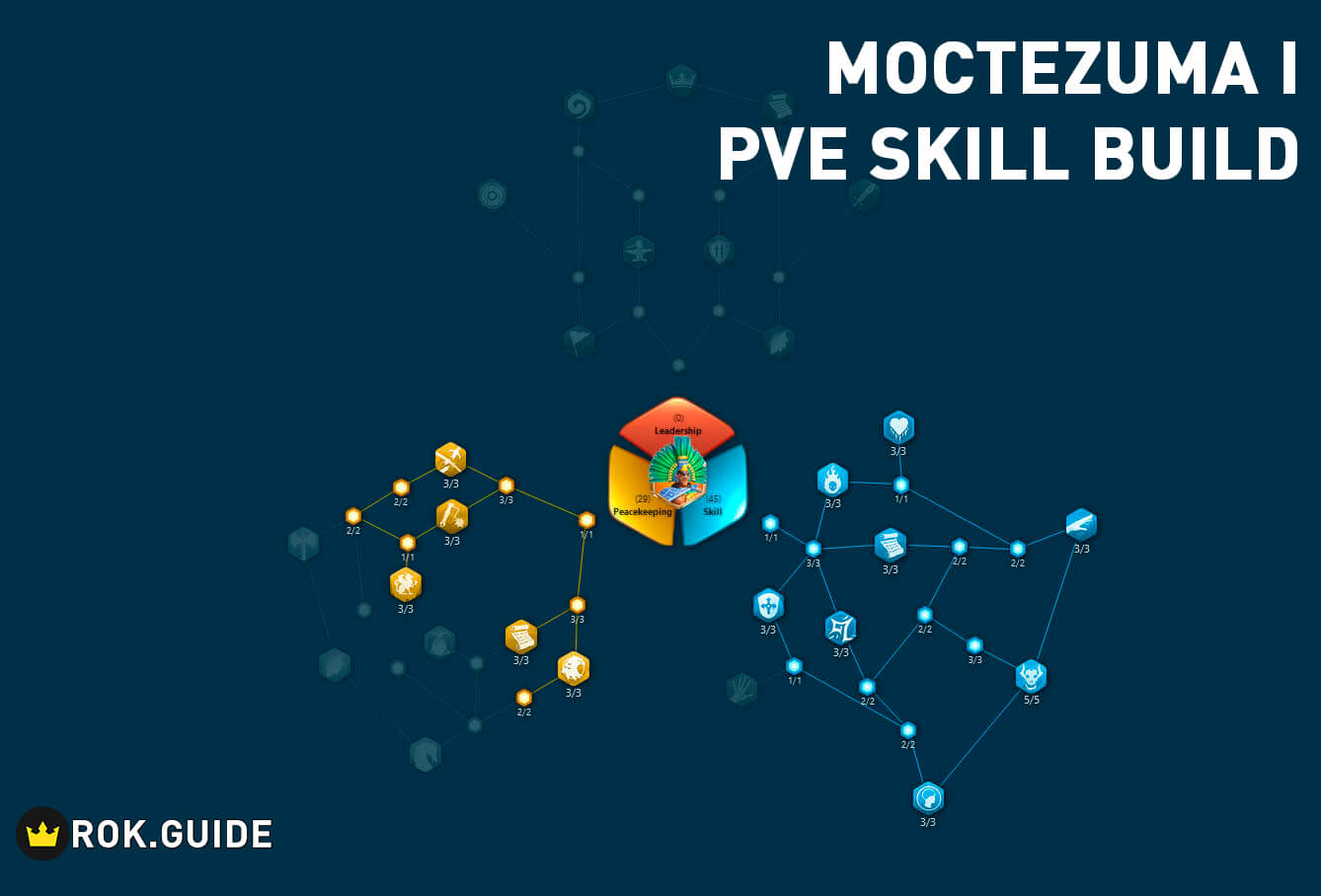 This talent tree build is focused on increasing the damage of his Skill “Land of the Prickly“.

In addition to increasing the rapid regeneration of Rage at the same time, any secondary commander to this will enhance his attack in an excellent way.

Moctezuma arrives in Rise of Kingdoms with the purpose of conquering and leading PVE Rally against neutral units, both forts, and structures garrisoned in KVK by this type of units. 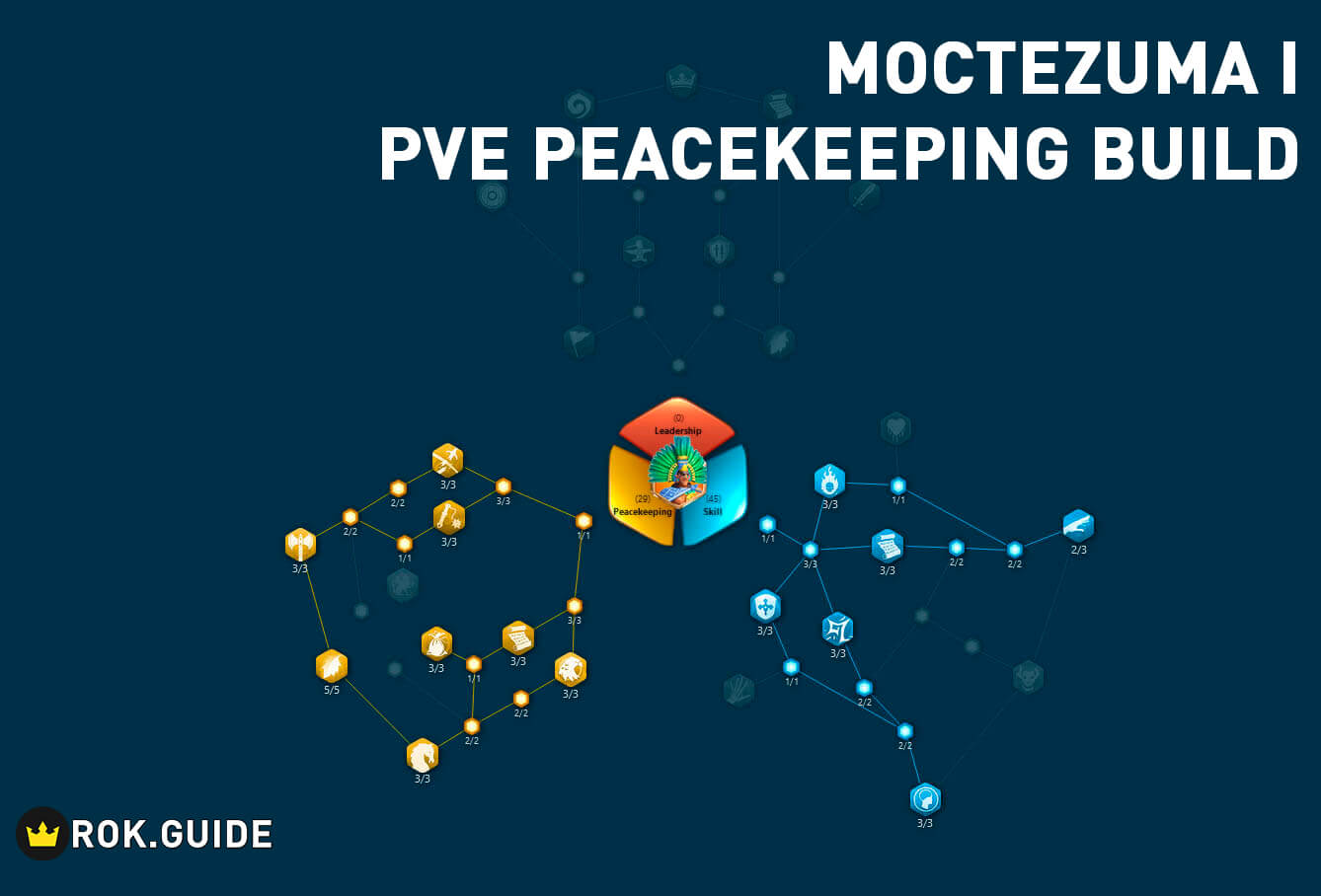 To seek greater damage to neutral units and get more resistance, you can use this build.

It is highly recommended to increase the healing factor of the army in addition to empowering him in these talents for defeating neutral or barbarian units much easier.

Best Commanders Pairing for Moctezuma I

As a commander without a specialty in a specific unit type, Moctezuma distributes his pairing depending on his task, example: If we want to rally a Pass in KVK, these are defended by archer units and these are weak against cavalry units, so we counterattack and hit a lot stronger these neutral units.

This is general equipment setup for all types of units led by Moctezuma. However, we can add according to the specific unit of the army that we use the necessary equipment to improve these troops.

For example, if upi use cavalry, you can equip Moctezuma with equipment for cavalry.