Complete guide to Jadwiga in Rise of Kingdoms. Let’s take an in-depth quick look at her skills, talent trees, and the other tips for making the most of her!

Xiang Yu is getting released alongside Jadwiga in the same update.

Deals direct damage to the current target (Damage Factor 900), and troops led by this commander deal 5% increased damage for next 3 seconds.

Troops led by this commander gain 2% increased skill damage. When they take skill damage, they gain 10 rage per second for 3 seconds. This effect can trigger at most once every 8 seconds.

Troops led by this commander deal 10% increased damage to rallied troops. When the active skill is used, damage taken is reduced 10% for 4 seconds. 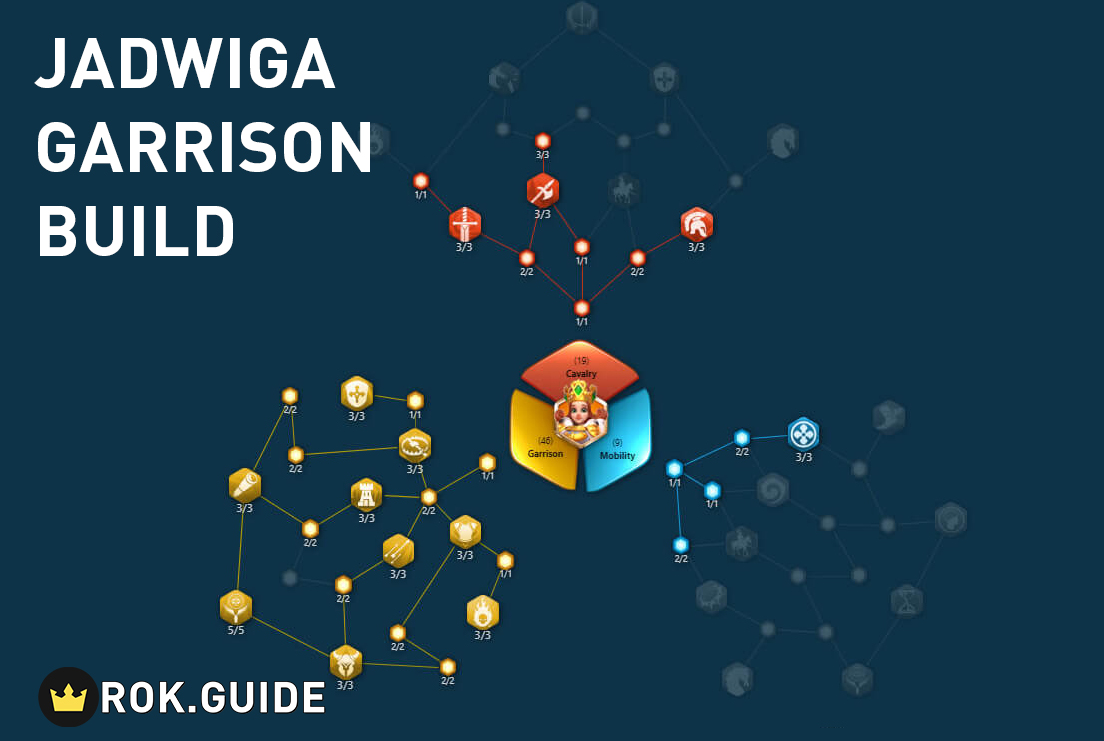 “We talk about this build in case you want to use Jadwiga as a Primary commander, however, our recommendation is that she should be used as a Secondary commander to defend garrisons due the fact that the combination of her talents is not the best in Rise of Kingdoms for this job.”

Jadwiga as the first and only commander to date specialized in leading cavalry units to defend the garrison that has the ideal talents and skills for this task.

Her active skill “Might of the Pious” deals great direct damage to her enemy and at the same time increases the attack of the troops led under her command by 20% for 3s, something impressive to quickly defeat any attacker.

“Oath of Loyalty” is a passive skill for both open-field and garrison, however, it enhances the latter with high percentages of defense, excellent for defending any stronghold.

She has a great Rapid Rage Regeneration, thanks to “Blade of Dodging“, which also increases her damage skill, and “Holy Blessing” reduces the same damage that Jadwiga takes from her enemies.

This would be the only combination of Talents that we have for Jadwiga to defend garrisons, realistically they are not the best talents in the game and it would be more effective if we use it as a secondary commander against other leaders more specialized in defending garrison.

(Using Jadwiga as the Secondary)

Jadwiga, Queen of Poland, was born in 1373 and at the age of 11 she became the first queen in the history of the country. The church loved her for her piety, the people for her kindness, and the nobility for her meek disposition. Until the end of her life, she strengthened alliances with neighbors and protected Poland from enemies.

In 1384, two years after the death of her father, Jadwiga was elected to the kingdom by the archbishop of Krakow and crowned as “King of Poland”. Wanting to expand the borders of her country and carry her faith, she married the Lithuanian prince Jagiello on the condition that he and his people would accept Christianity for the sake of the union of Poland and Lithuania.

Jadwiga and Jagiello ruled together – and with great success. They resolved a long-standing conflict with the Teutonic Order, persuaded cousin Jagiello to abandon claims to the Lithuanian throne, and in 1387 reclaimed part of the territories of Ruthenia. Jadwiga also actively supported religious and scientific initiatives and funded the opening of colleges and universities.

Jadwiga died in 1399 in childbirth at the age of 25, but during her short life she managed to do a lot for Catholicism in Europe and the security of Poland. The Roman Catholic Church canonized her (declared a saint) in 1997.