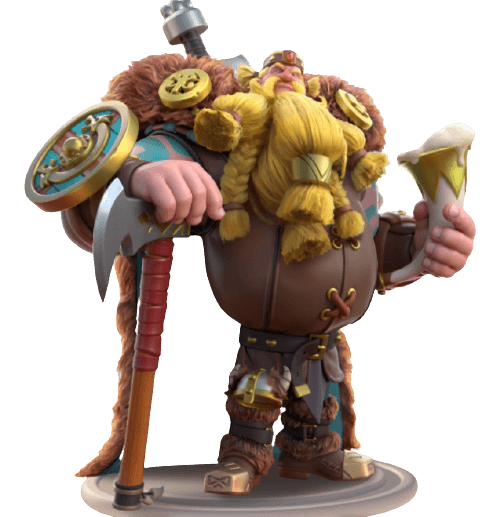 Harald Sigurdsson is exclusively available for kingdoms over 310 days via Wheel of Fortune event. 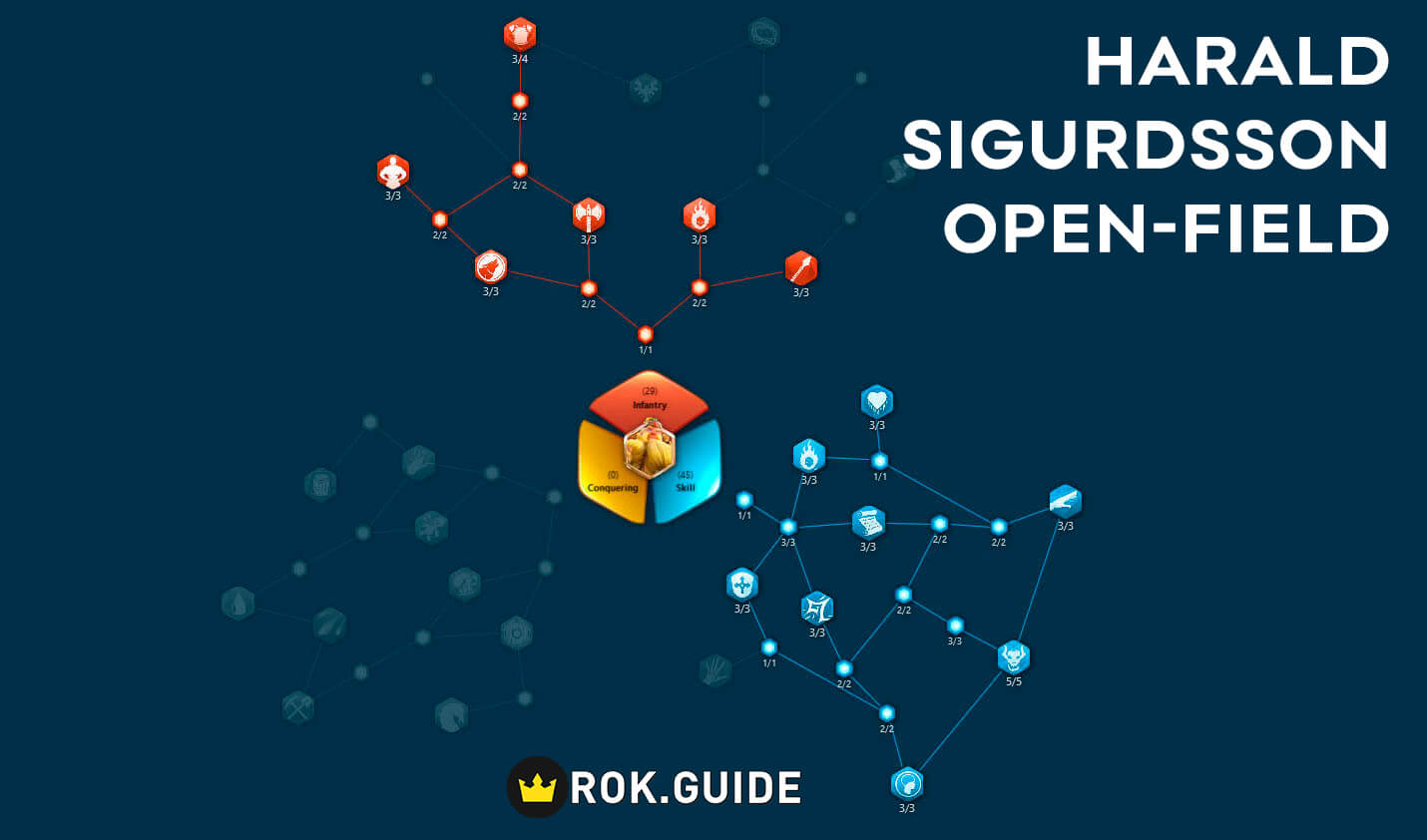 Harald Sigurdsson is a supreme commander for combat, his active skill “Berserker” guarantees strong direct damage and if he is surrounded by enemies this skill hits a maximum of 3 targets in AOE, at the same time increases the damage of all his troops 20% for 2s.

“Viking Battleaxe” will not be an effective skill for open-field, it only works in the “Conquering” build.

As a great infantry leader, he has a powerful skill that can be a double-edged sword, “Varangian Guard” guarantees all the infantry under his command great damage and march speed, however, using “Berserker” increases his attack. much more, but it lowers his defense, both to a maximum of 5%. This effect lasts 8 seconds, and can stack up to 15 times.

“Stamford Bridge” a great skill that counteracts the debuff caused by “Varangian Guard” as it gives Harald a 20% chance when attacking to launch his active “Berserker“, making him immune to any defense reduction for 5 seconds.

Harald Sigurdsson is an excellent fighter for open-field, in this build, we focus his best talents to cause devastating damage to any enemy while fighting on the map, as an infantry commander Harald is offensive at all times, he is not weak, but neither is he a Robust infantry commander as we are used to seeing in cases like Richard, Martel or Alexander, his specialty is combat and brings destruction under his ax to any of his rivals. 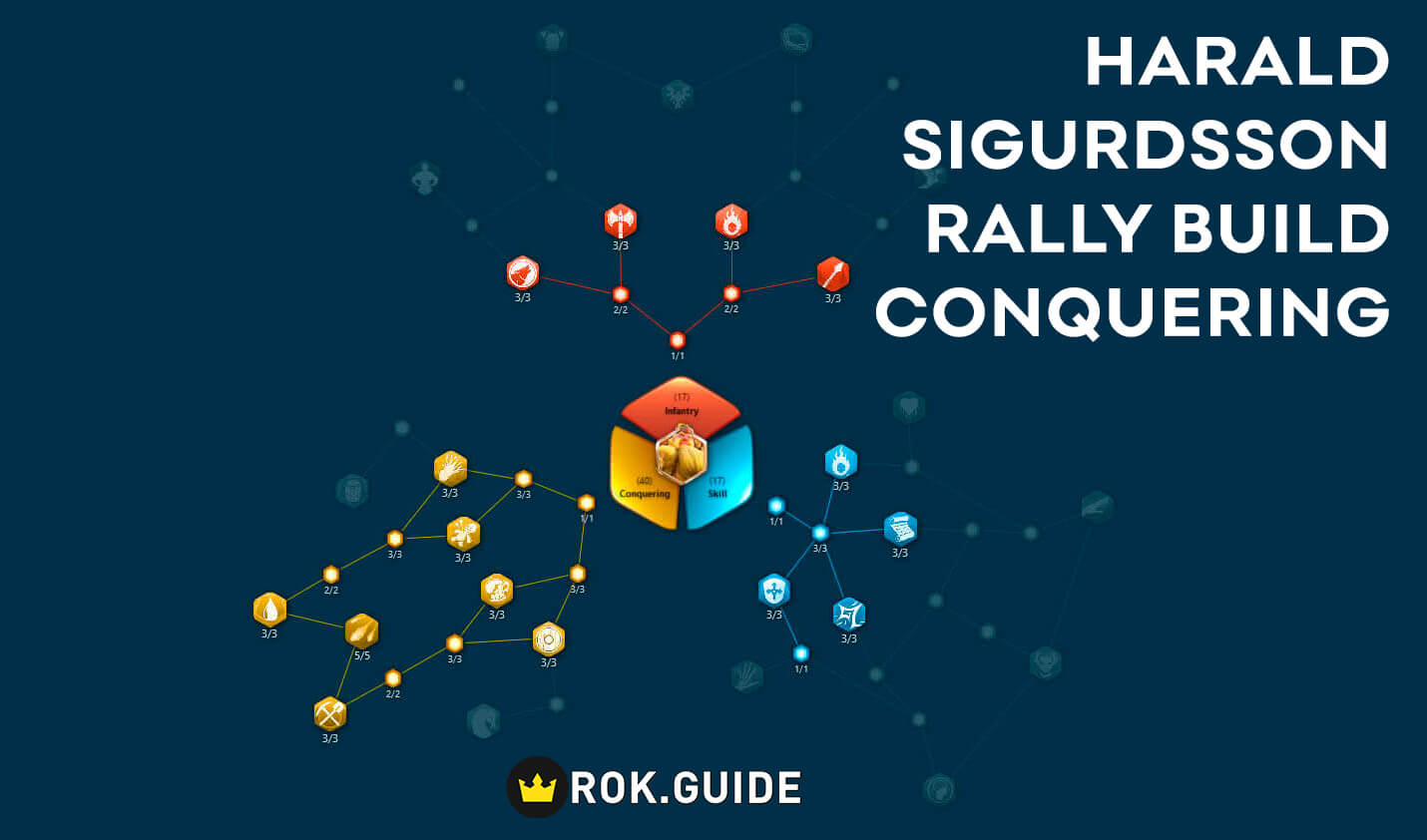 As a conquering commander, Harald is excellent at attacking enemy cities and garrisons, it is one of his virtues as a fighter and infantry commander.

“Viking Battleaxe” is an extremely effective skill for this build and only works in direct Rally attacks to cities and garrisons, Harald increases the damage a maximum of 10% to his infantry, at the same time reduces all damage by probability up to 30% taken during the attack.

Harald Sigurdsson is a great conqueror! Thanks to his talents in this build and his skills, his damage at all times will be effective when attacking cities or garrisons, emphasizing once again that he is an offensive commander.

Although he gains a great damage reduction when attacking this type of structure, the defense and resistance of your army is not your main strength, for this, we depend on the assignment of secondary commander that we provide.