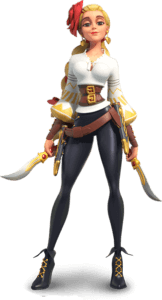 Other | Mead of Death

Following the death of Libuse, Vlasta leads a band of women against the male forces of Libuse widower, Premysl. Sarka, Vlasta’s lieutenant, entraps a band of armed men led by Ctirad by tying herself to a tree and claiming that the rebel maidens tied her there and put a horn and a jug of mead out of reach to mock her.

Ctirad believes her story and unties her from the tree, whereupon she pours the mead for the men as a celebratory thank you gift.

Little do the men know that Sarka and the maidens have put a sleeping potion into the mead.

When all the men have fallen asleep, Sarka blows the horn as a signal for the rebel maidens to come out of their hiding places and join her in slaughtering the men.

She is captured and defeated along with the rest of the army soon afterward.