This commander is exclusively available for kingdoms over 120 days. 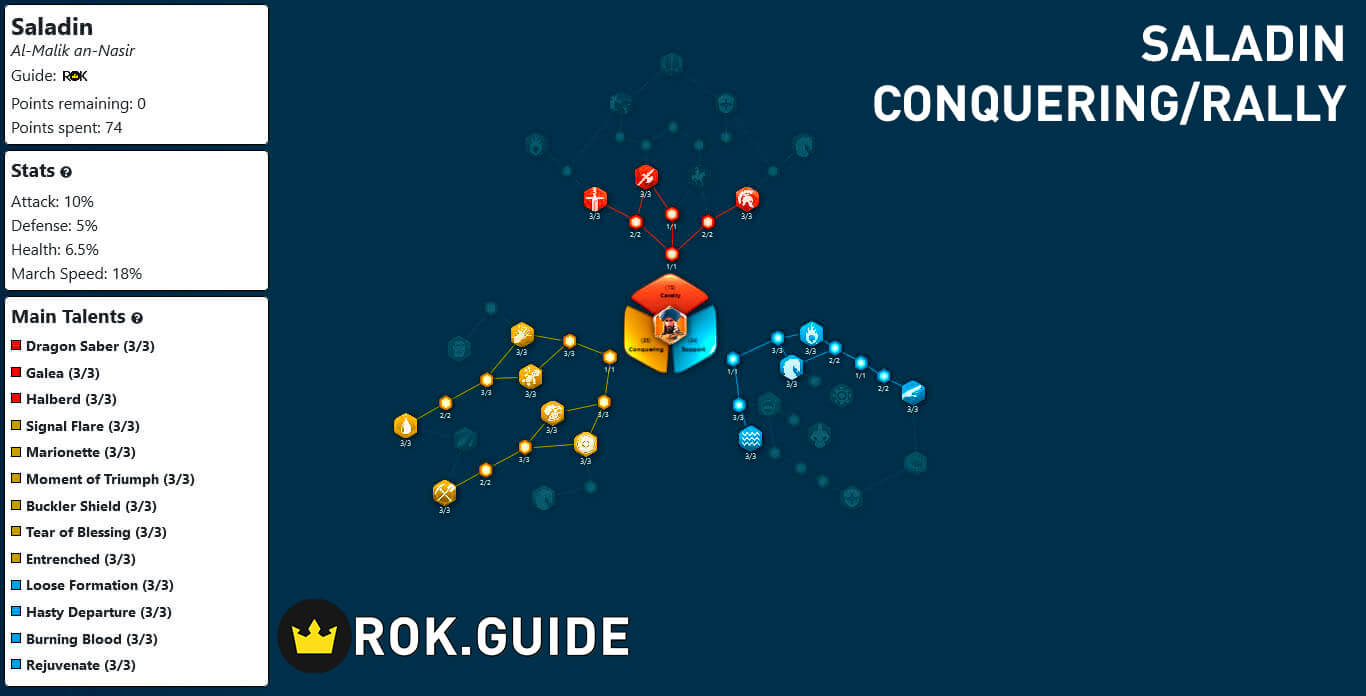 If we are going to use Saladin to Attack enemy cities or structures, it is important to highlight because we select this Build of Talents and abilities mainly.

Saladin has a powerful Ability called “Generosity”, this ability is devastating for any city or structure that we attack from both Secondary and Primary commander thanks to the Bonus at its maximum level of (15% Damage Bonus)

To give the best effectiveness to our commander as “Conquering” we must select a series of fundamental talents for his attacks:

Saladin is one of the best commanders to use if we want to attack enemy structures, this talent system is advisable to leave it only to do Rally since otherwise it will be weak using talents that only work in direct attacks on cities and strongholds.

Saladin in Open Field is excellent, his “Hold Fast” direct damage Skill is very safe when defeating enemies as it drastically reduces the Healing Effect that any enemy hit by this Skill receives. His multiple bonuses to cavalry such as his “Ghulams” ability make him a fearsome commander if he leads an army fully on horseback, he is fearsome and safe while riding.

Our main enemies will be Infantry Commander such as Richard 1, Alexander, and Guan Yu, however, Saladin’s 3rd skill “Bond and Fate” will reduce their damage in skill up to 30% mainly if we face Guan Yu who has a powerful blow.

His talents focused on “Open Field” vary unlike “Conquering” but others remain thanks to his damage capacity and improvements to his units.

If we are located within the Battles with Saladin, we must be cautious and safe, our enemies can be strong, however, we are also strong while fighting with Saladin, but we must not be confident, we must select our enemy and bring him a final blow that always remembers our purpose, to achieve victory at any cost.

Hopefully, after checking this Saladin in-depth guide, you will find it easier to master him in Rise of Kingdoms – Admiral-Hunter.