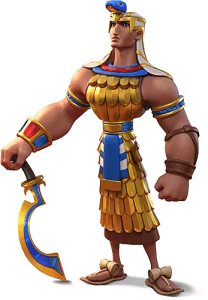 Thutmose III was a military leader and pharaoh of the Eighteenth Dynasty of Ancient Egypt. He gained fame for his success on the battlefield. Having reigned in 1458 BC. BC, he gradually expanded the boundaries of his empire to include Syria and Palestine. In 1445 BC. e. Thutmose defeated the army of the king of the state of Mitanni and subjugated the western bank of the Euphrates. Under his leadership, Egypt became a real empire. For military merit, he is now called the “Napoleon of Ancient Egypt.”

In all his life, Thutmose was never defeated in battle. Of all the Egyptian dynasties, the Eighteenth ruled over the largest area, had the strongest army, and ruled the longest. It was Thutmose III who played the most important role in this. While he ruled, the kings of Libya and Babylon paid tribute to him, and Palestine and Syria became part of Egypt. He was a brave and skillful military leader and led his country to unprecedented prosperity