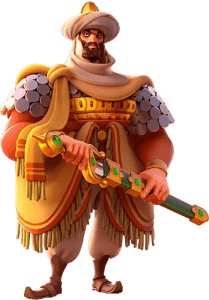 Tariq ibn Ziyad is exclusively available for kingdoms in Season of Conquest via Wheel of Fortune event.

Tariq ibn Ziyad was an Arab commander of Berber origin. He joined the army of Musa ibn Nusayr when he conquered the Berbers.

Tarik quickly earned a brilliant reputation by defeating the Visigoths at the Battle of Guadalete and conquering their kingdom (present-day Spain). Gibraltar got its name from the Arabic name “Jabal Tariq” – “Mount Tariq”. But the story of the commander ended sadly: having conquered Spain, he was recalled to Damascus, where he spent the rest of his days in disgrace and obscurity.

Tariq ibn Ziyad is one of the main commanders in the history of the Iberian Peninsula. He showed courage and valor by landing at the present Gibraltar. But the brilliant victories did not bring him the mercy of the caliph, and his life ended in disgrace.