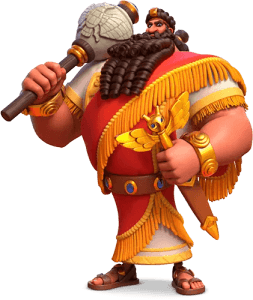 Other | Emperor of Akkad

Sargon the Great is exclusively available for kingdoms in Season of Conquest via MGE.

Sargon the Great was born into a commoner family and in his youth served at the court of the king of Kish. After the invasion of warriors from the city of Umma, Sargon took advantage of the weakness of the king, usurped power and founded the Akkadian Empire.

Having seized power, Sargon began to expand the territory of the empire with battles. He created the first army of reservists in history and subjugated all of Sumer, the city-state of Mari and the ancient kingdom of Ebla. After that, he went further west into southern and central parts of Asia Minor.

Sargon achieved a lot not only militarily. The economy, agriculture and culture in the Akkadian Empire developed rapidly; the king managed to strengthen state power and appoint faithful governors.

Sargon the Great was not just an outstanding warrior who founded the first unified power of Mesopotamia. He also developed the economy, making the Akkadian Empire one of the strongest economies of that time. It lasted only a hundred years but influenced the development of all mankind. Sargon has rightly earned his title of “King of the Four Directions”.