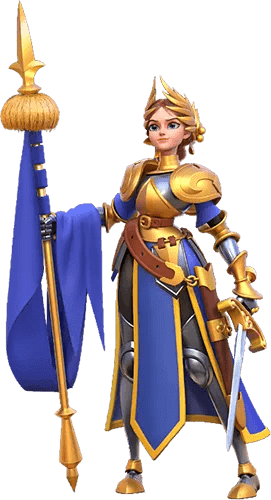 Joan of Arc is exclusively available for kingdoms in Season of Conquest via Wheel of Fortune.

Joan of Arc, also known as Saint Joan, was the daughter of a French peasant family, born during the Hundred Years’ War between the French and the English. At the time, internal struggles within France had led to a string of battlefield defeats against the English invaders, who had occupied northern France, making life hard for its people.

At a time of great strife in France, Joan encountered a miracle.

Following the “voice of God”, she joined the expedition to save the city of Orlans. On the battlefield, she broke with the French army’s careful strategy, leading an all-out assault. Under her leadership, the French army encircled Orleans and achieved victory in one of the major turning points of the Hundred Years’ War. She went on to lead the French to further victories.

In 1920, Joan of Arc was made a saint. An unyielding heroine, this young woman became one of the most important cultural symbols in France and the West, with many writers and composers creating works about her.