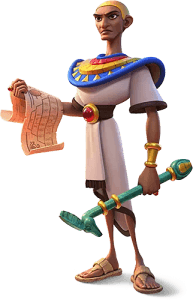 Imhotep was an adviser to Pharaoh Djoser during the Third Dynasty of Ancient Egypt and the high priest of the sun god Ra at Heliopolis. He received this status not by birthright – he was a commoner – but for wisdom and perseverance. Thanks to them, he rose and became the right hand of the pharaoh.

Djoser appreciated the talents of Imhotep, and he responded to the pharaoh with devotion. One day Djoser had a dream about climbing a ladder to heaven. Therefore, Imhotep built a stepped pyramid so that the soul of the pharaoh after his death could ascend to the god Ra. The pyramid is considered the first building in history made entirely of stone.

Imhotep’s talents benefited not only the royal family. He was the pharaoh’s physician and built the first medical academy in history to bring the knowledge of the science of healing to the masses. At that time, it was still poorly developed, but Imhotep already knew how to treat more than two hundred diseases, for which he is rightfully considered the father of ancient Egyptian medicine. After his death, he was revered as the god of healing and the son of the god Ptah. With his mind, Imhotep managed to ascend from a commoner to the rank of a deity and forever inscribe his name in history