Everything you need to know about Cheok Jun-gyeong in Rise of Kingdoms!

Cheok Jun-gyeong and Pakal II are the two new commanders getting released together in the update!

Note: Players can obtain Cheok Jun-gyeong from the Wheel of Fortune event!.

Cheok Jun-Gyeong (CJG) is an extremely powerful commander for Open-field who comes to Rise of Kingdoms specialized in leading Infantry units, ideal for this type of civilizations and own units.

Specialized in Open-field, he has fearsome skills and talents to any enemy.

The active skill “Courageous” causes a lot of damage to the enemy and if it decreases the strength of the target to below 30%, it further increases the damage of this skill, unique in its kind and of great impact.

“Byeolmuban“, a passive skill that empowers the infantry under his leadership, at the same time increases the damage they cause towards the cavalry, but nevertheless the archers will also do more damage to his army, a double-edged that we must know how to use in the open -field.

“Stalwart” his skill, being improved with the “Expertise“, is incredible because of its effectiveness in open-field. It decreases with a high probability the damage that CJG receives per skill.

“Sacrifice” is added another powerful skill only to lead infantry troops where they gain a series of improvements such as march speed and probability of causing more damage.

While on the map, troops led by this commander have a 40% chance to take 50% less skill damage. This damage reduction effect can trigger once every 4 seconds.

If troops led by this commander consist only of infantry units, they gain 15% increased march speed with a 100% chance of dealing 5% increased skill damage for 8 seconds when attacking. This effect can trigger once every 4 seconds and can be stacked up to 8 times.

Vow to the Death

While on the map, troops led by this commander have a 40% chance to get incoming skill damage reduced by 50% and deal skill damage to up to 3 enemy targets in a fan-shaped area (damage, factor: 50).

Damage from this attack is reduced by 15% per additional target.

This ability can trigger once every 3 seconds

Cheok Jun-gyeong is a commander specialized in Infantry and Open-field!

Although we would like to give him a different approach with other talents, it is difficult thanks to the fact that “Versatility” has a completely null talent tree, and his specialty forces him to have a completely offensive formation, making him a fearsome commander for Open-field. 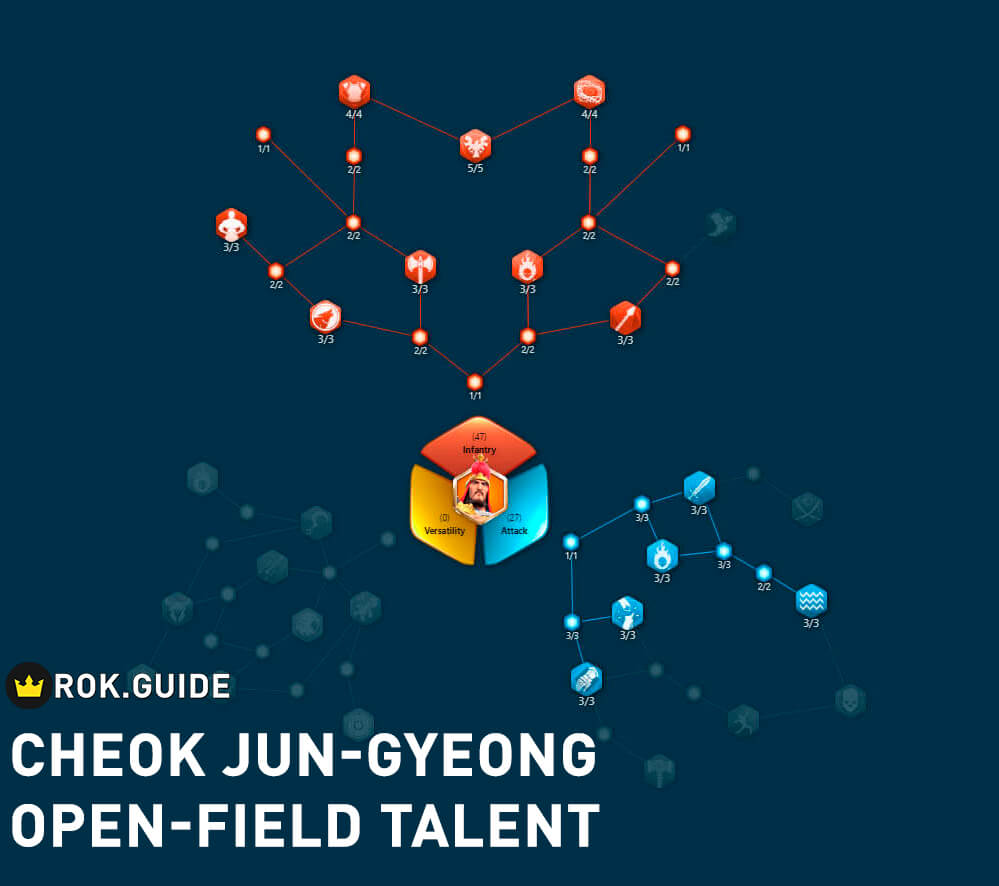 According to the tests from Wick Gaming (video below):

is exceptional in 1v1 but not good in AoE or in a big murderball.

is very well in 1v1 matchups but is very strong in huge fights.

In general, his power in the openfield is very similar to

Leonidas but CJ has better damage.

will replace the old

in the near future in both open-field fights and rally!

It’s better to just use CJ as the secondary commander for now.

In short, if you have Guan Yu and Alex, you can absolutely consider putting Alex somewhere else and max out Cheok Jun-gyeong to have him behind your Guanyu as the secondary commander!

He is really worth a shot!