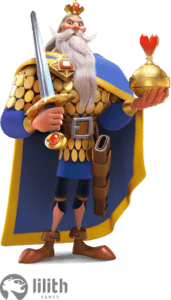 Charlemagne is exclusively available for kingdoms over 140 days. 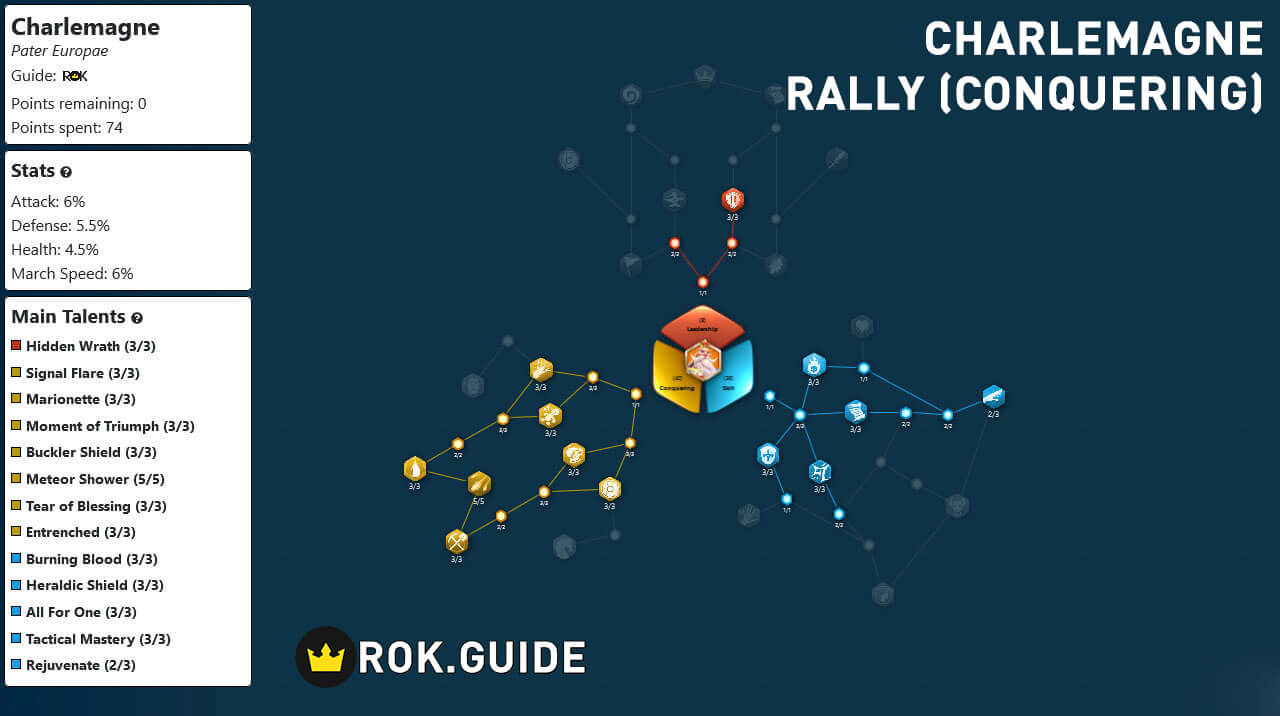 In this first Build of Charlemagne, we will expose the best talents and skills with which to make any attack on cities or garrison effective.

“Eagle of Jupiter” its active skill has a good single target damage. Despite not being one of the most powerful skills in Rise of Kingdoms for a commander of its legendary quality, it causes a lot of damage, even more when we are leading a rally where the total power of our units is greatly increased.

When fighting on the map, Charlemagne has a passive skill “Happy Home”, this has a 10% probability of protecting us with a shield that absorbs damage, it is a great skill for any attack on cities or garrison.

“Plot Maneuvers” this is his main skill for Rally, it increases the damage and defense of our Rally by 10%, it only works when we start a rally, that is why it is one of its best skills and it is important to have it maximum if we choose to Charlemagne as a conqueror.

“Pataum”, another of his essential skills for PVP, increases its damage skill by several percent each time we lose 10% of our army until reaching 70% of our total troops and further increase this damage by a higher percentage, even It has factors for both open field and rally, it is an excellent skill

His definitive skill “Carolingian Renaissance” is ideal for attacking cities or garrison, Charlemagne decreases 10% of his troops killed in each attack, they will go to the hospital, the more units he has under his command this percentage of loss reduction becomes more effective . Here are the most effective talents for Rally:

Charlemagne is a commander made to attack cities or garrison thanks to his skills and talents. This build is focused on increasing our damage and resistance against structures, however, we can use some other more direct builds in terms of rage and attack that will also have great effectiveness when attacking cities and garrison, and we will explain it below: 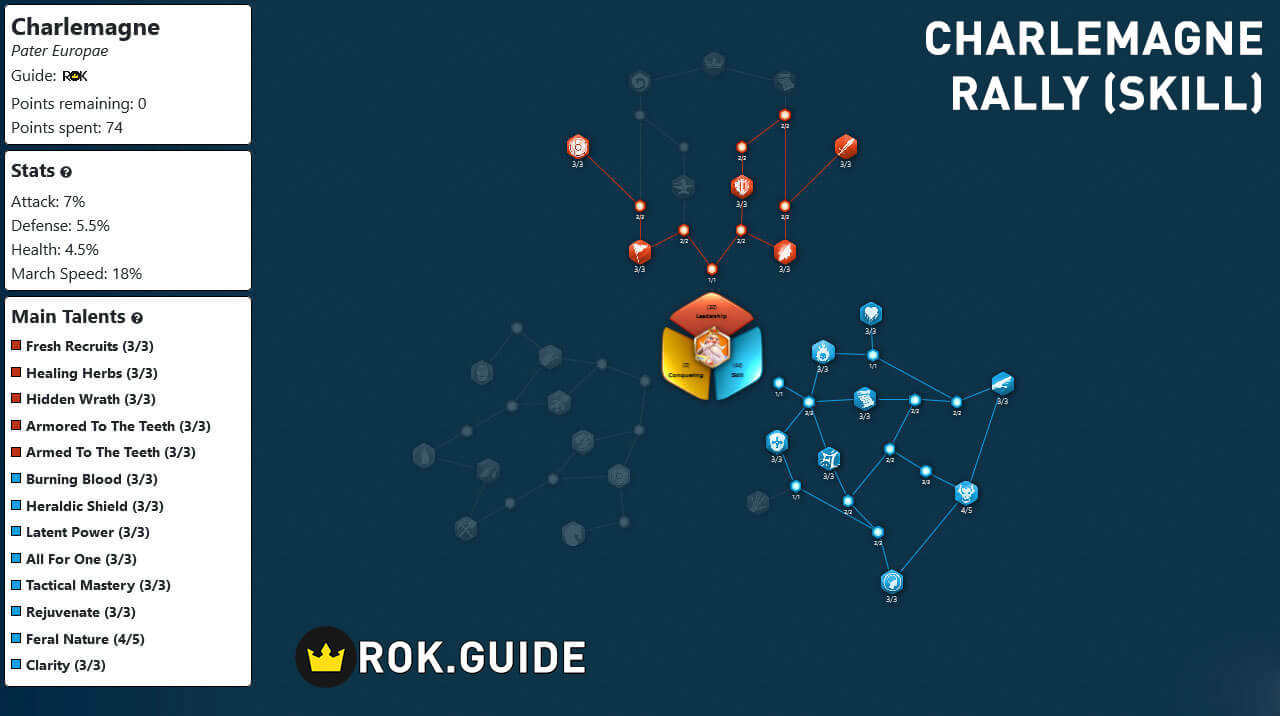 In this second build, we will focus Charlemagne’s damage on his active skill, and how to quickly regenerate Rage to use this as his main form of damage. At all times Charlemagne will be a conqueror regardless of the talents we choose, his skills were created with a single purpose in Rise of Kingdoms and that is to burn garrison.

Although we do not select any talent from the “Conquering” tree for this occasion, its effectiveness when conquering will be very powerful since this build is an alternative and directs its specialization to a new change of talents and way of inflicting damage:

Analyzing this build we can see that Charlemagne through these talents will increase damage skill, it will even maintain a rapid rage regeneration to be able to use “Eagle of Jupiter” over and over again almost instantaneously.

As we said, despite not being a skill with a lot of DPS, we can take advantage of it a lot by having a talent tree of this type that increases the damage skill of our commanders and their rapid restoration of rage. 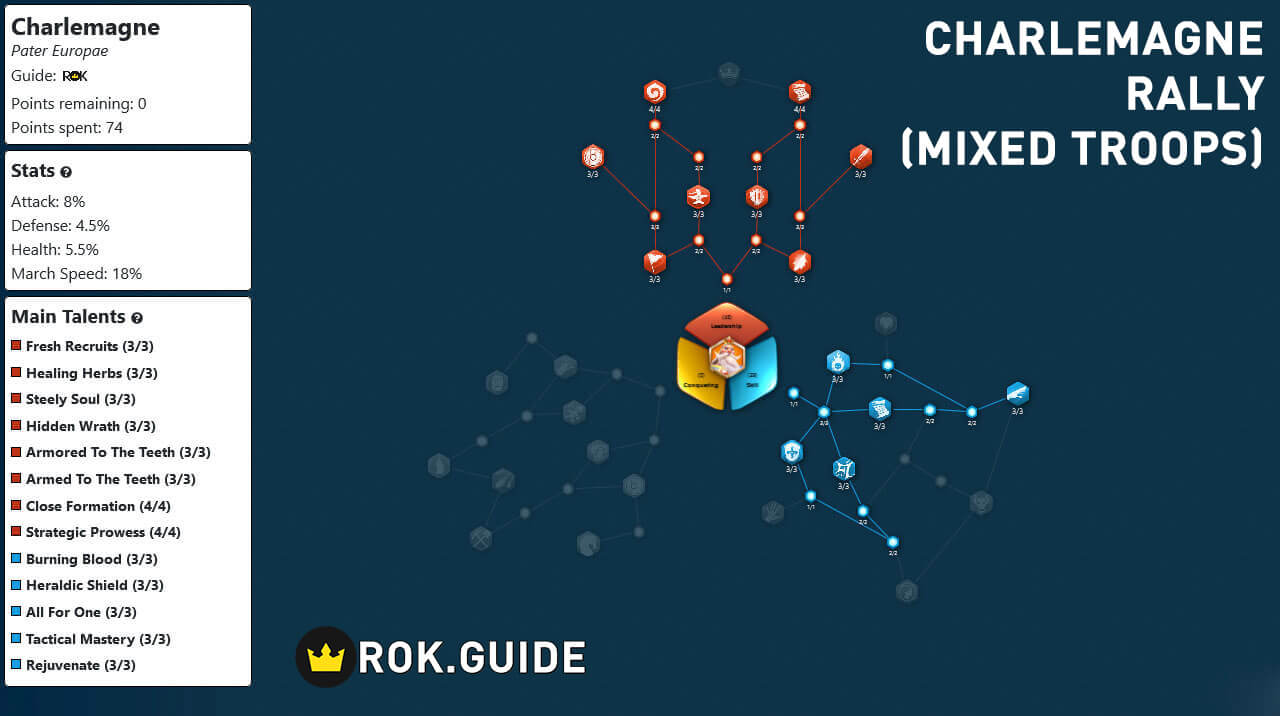 In this third and last Build we will adjust our “Pater Europae” to tremendous versatility, using mixed troops in rally when attacking cities or garrison.

When comparing it with the previous builds we can say that we will have less damage skill, less rage regeneration and less resistance when attacking garrison or cities, however we gain extra combat statistics and troop capacity, as well as abilities that will adjust our army for better use mixed troops.

This will also be a necessary build with secondary commanders like Hannibal Barca who greatly increase their damage through their skills to armies with mixed troops and increase their maximum capacity:

The use of this latest talent build is an alternative to the previous ones, as we have been explaining, each of them has a unique and absolute way of use.

In this case, the main strength of Charlemagne will be its mixed troops and the extra capacity of troops, these will gain many statistics during the battle and will be greatly strengthened, in addition to the use of important talents that taking advantage of them correctly will have a great impact in each attack, however, we must look for the best of the secondary commanders to accompany him to Charlemagne, it is something we will depend on a lot in any of the three builds.