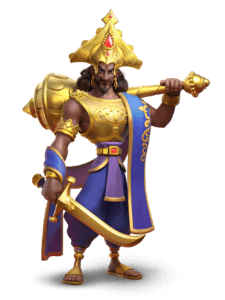 Others | Lord of the Peacocks

Chandragupta Maurya is exclusively available for kingdoms over 310 days via The Mightiest Governor event. 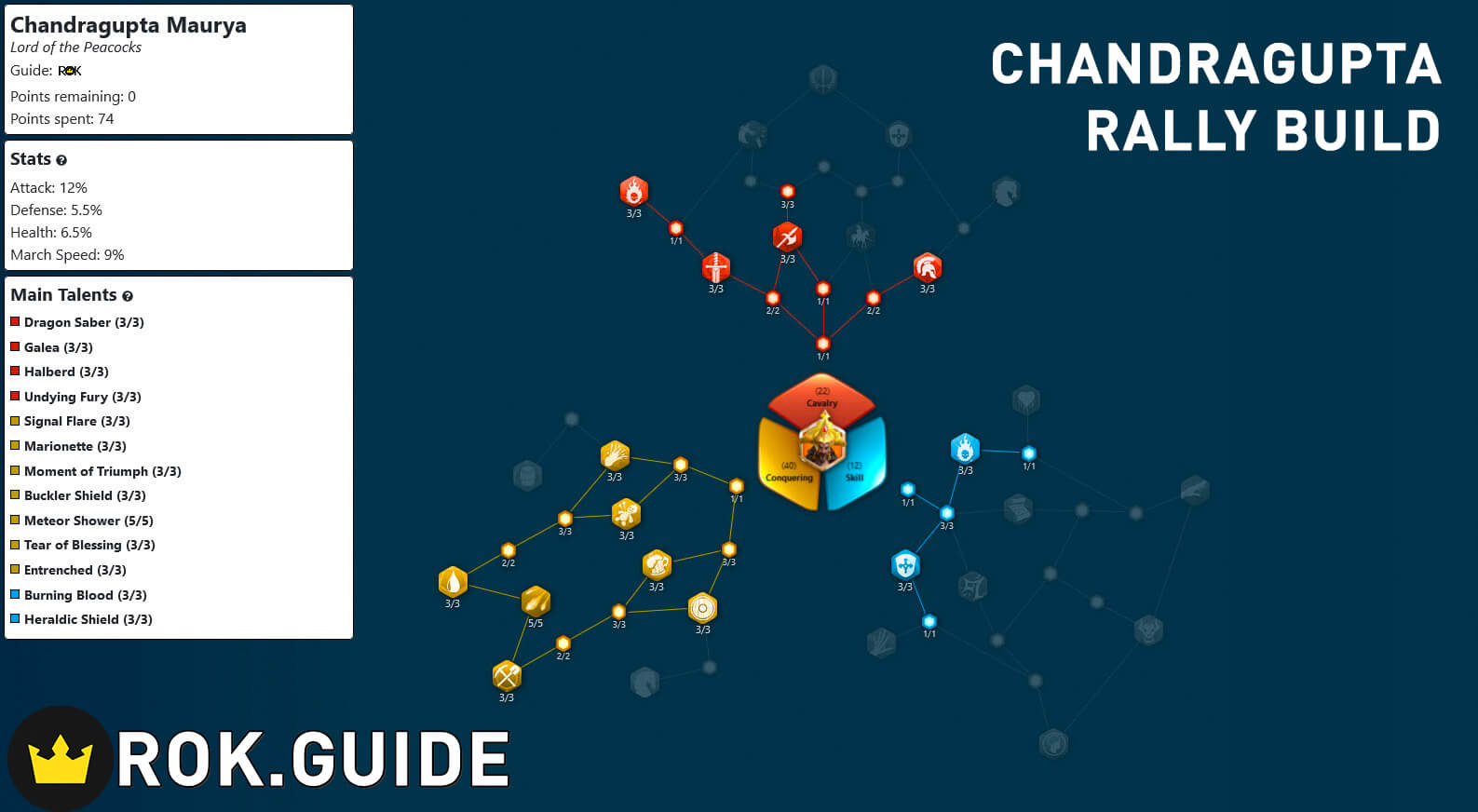 In this first build we will focus on Conquest, one of Chandragupta’s game modes and we can say, his favorite and most effective.

Chandragupta has some impressive skills “Hidden Moon” his active skill benefits from DPS all the troops under his command at incredible levels, in turn the cavalry, his flagship unit will be affected by an extra buff of damage that will be accumulated up to a maximum 45% in 10 seconds, something really admirable in a commander of his height.

“Royal Elephant Brigade” his main passive skill for conquest. This skill reduces the damage we take when attacking garrisons and we also gain a stack of blessing when casting “Hidden Moon”. It is important to note that at all times we must use cavalry units to satisfy the demand of Chandragupta and this is the commander that we want so much, “Arthashastra” and “Self-Control”, both passive skills that only cavalry units will perfect in any battle. , therefore, we must maintain our leadership at all times as Cavalry Commander:

Chandragupta as a conquering cavalry commander is excellent, by following these talents we will have a natural garrison destroyer of any enemy, his talents as well as his skills transform him into a torment for structures that he wishes to conquer. Always highlight the power of the cavalry units under your leadership and it is important to use these benefits in any attack that involves Chandragupta. 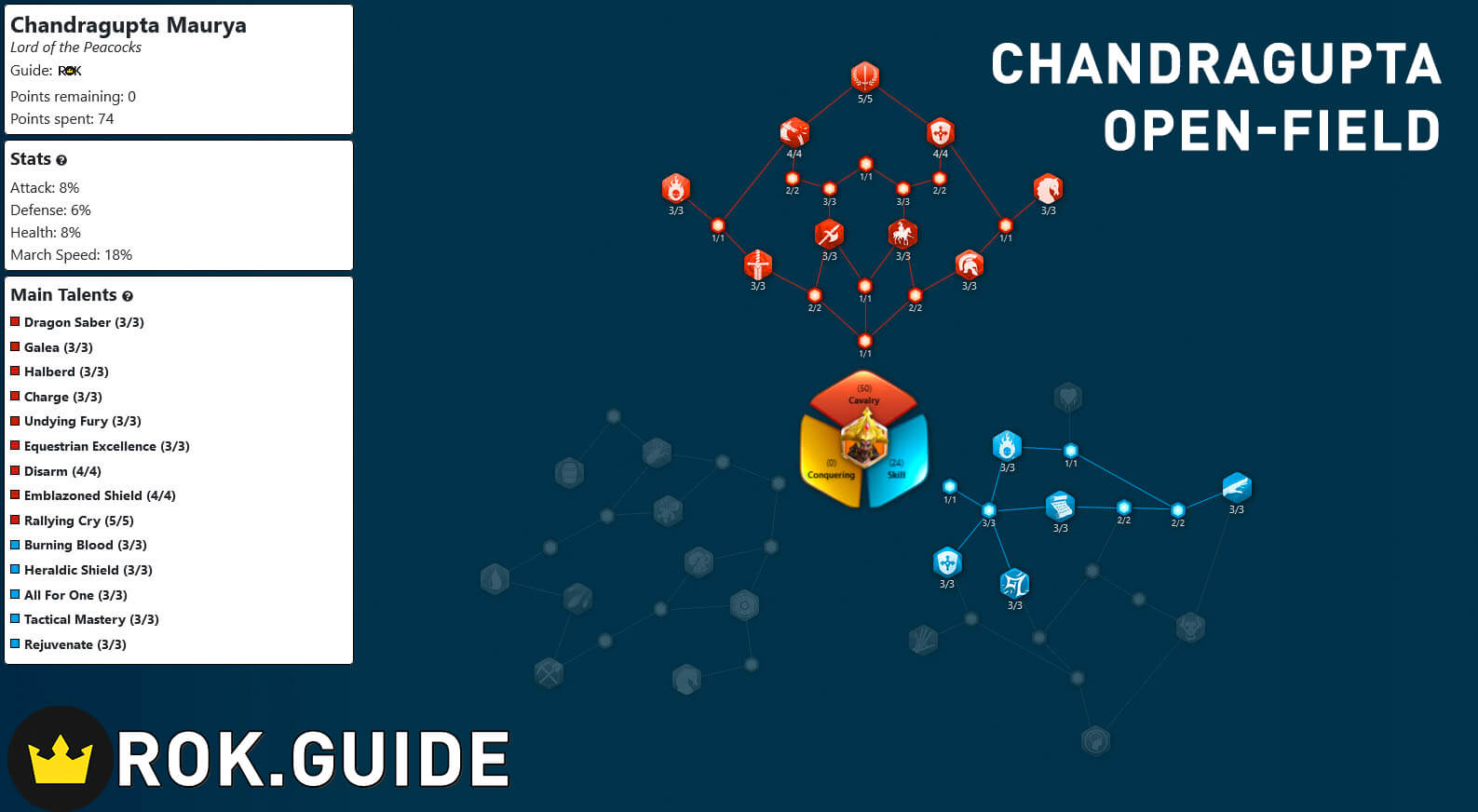 Chandragupta in open field is a commander who plays a leading role like many Legendaries of his kind in Rise of Kingdoms. As we already explained about their skills, they work perfectly in either of the two PVP forms, conquering garrisons or attacking enemies in open field.

This commander does not have a powerful direct damage skill; however, “Self-Control” turns that disadvantage into a powerful weapon since it gives Chandragupta direct damage against any enemy that he faces and in turn strengthens the cavalry under his command. command in exquisite benefits.

His ultimate skill “Maurya’s Might” is incredibly good for fighting in open field as well as for conquering, it generates blessed for each attack with a 50% probability inside and outside the territory of his alliance, however, outside the territory of the alliance it will be much more effective since it will gain 2 blessed for each probability that comes out:

Chandragupta in open field, he must have his cavalry talents at all times, this commander is focused on the damage his units can do, not the damage his skill achieves, therefore, each of the bonuses and improvements that this he can offer his mounts will be essential to fight against any enemy, also the combination of his entire arsenal as a commander is truly incredible (skills-talents-cavalry-attack-damage).