There are a lot of working commander pairings in Rise of Kingdoms.

People have been discussing a lot about the best Primary/Secondary commander pairings in the game since the beginning.

While many of them are extremely great, some others are very terrible pairings, if not saying that they could even give you some negative impacts.

If you are still looking for the best secondary commander for your primary one, you will love this guide!

The Best Commander Pairings in Rise of Kingdoms

First, let’s talk about the best current PVP parings in Rise of Kingdoms in all its forms of open-field battles, defensive, offensive, rally, and garrison.

This is currently one of the most devastating combos in the game for open-field.

Two cavalry commanders who perfect their skills against each other and become a powerful pairing against any type of army or unit.

Genghis Khan has unique skill damage in the game with a probability of being reused after the 1st time that causes a lot of damage to his enemy, William I at the same time is improved in every aspect with Khan, thanks to the talent tree “Skill” and the Rapid Regeneration of Rage thus also taking advantage of its excellent AOE damage and high impact.

An excellent pairing for both Open-field and Rally, Saladin as a conquering commander boasts impeccable stamina, thanks to his great Damage-Skill reduction, as well as causing a great debuff of healing to his opponent.

The combination of these two commanders becomes resistant and impeccable against any enemy, it can undoubtedly be the cavalry pairing tank.

Takeda, another great cavalry commander, causes a lot of debuffs all the time to his opponents, this makes him one of the best counters in the game before any commander or unit.

Attila + Takeda is the strongest pairing in Rise of Kingdoms for Rally specifically when attacking any garrison.

Undoubtedly this combination is a chaos for any defense, the amount of deaths that these commanders cause is devastating.

This pairing is characterized by the attack and constant improvement of its troops and statistics at all times, they do not have damage skill but that does not make it less important, its impulse is the strong attack per buff and the debuff that they cause to any enemy, they hit at the precise moment and point.

One of the most powerful pairing for open-field infantry, the combination of these commanders is extremely good!

Guan Yu has an incredible damage skill in AOE that can deal damage to multiple targets on a large scale, in addition to his rapid Rage regeneration. for “Skill” talents and increased damage.

The infantry under the orders of these commanders is fearsome, Alexander, a defensive-offensive commander, improves and provides a great buff to his troops in addition to having a support effect for his close allies giving them a strong damage absorption.

Fully offensive infantry pairing for Open-field! This duo is one of the best currently leading infantry, thanks to its combination of damage and buff, constant and strong buffs.

Harald Sigurdsson is a powerful commander for open-field and he becomes even stronger when he fights against various enemies thanks to his main skill that enhances his attack, in addition to other unique and exclusive skills for open-field.

Absolutely devastating combo for open-field, specialists in leading archer units and among the strongest in the game.

Ramesses is a debuff damage perfector commander, his impact per skill starts a sequence of continuous damage that at the same time decreases the defense of his target causing a great debuff in addition to gaining other improvements for his troops in his favor.

YSG provides the best damage per skill in AOE, ideal archer pairing for PVP in open-field.

This pairing has a lot of similarity to each other, both have great AOE damage improved between them, thanks to talents and skills.

They also have an excellent ability to lead garrisons and these will be perfectly protected by this couple thanks to its protection and attack.

This open-field pairing has the same effectiveness and excellence.

If you are looking for a strong paring capable of perfectly defending any garrison, this is one of them.

Martel is an excellent PVP commander who guarantees a great defense to his troops and improves the garrisons he defends, when paired with Theodora, the combination of these is almost impenetrable to any attack.

They gain full defensive stamina and stats, share their Garrison Commander specialty, and will be able to withstand the best of attacks, thanks to Theodora’s Rallies damage reduction.

If you enter the 1st season of KVK, I can be sure that this will be the most effective pairing for PVP both open-field and garrison defenders.

Great resistance and defense on the part of Charles Martel, an absolute leader who has some talents and skill very good combining YSG with his great damage in AOE capable of affecting multiple targets and causing many casualties, both at the same time are specialists in defending garrisons, thanks to the fact that they share a unique ability for this task that enhances and improves it while serving as commanders.

The absolute defense of garrisons has a name and it is Zenobia + YSS.

While serving as captains of any garrison, the skills and talents of both come together almost perfectly and we can say that they are the pairing capable of withstanding the strong siege of Attila-Takeda. With the exception of Attila-Takeda, the rest is a piece of cake for these guys.

There are many excellent pairings in Rise of Kingdoms thanks to the variety of commanders, skills and talents, however, these are the most recommended and strongest to date, these are undoubtedly the ones that every player should achieve or write on their task list.

Some of the most commonly used pairs at the current game but this doesn’t mean other pairs can’t be used. The order is random and does not rank the secondary commanders.

Note: “Eulji, Osman, Kusunoki, Keira, Boudica, and Scipio” are some of the commanders that are useful up to season 1 of KvK. Afterward it is best to swap to better commanders and I’ve only recommended them as some of the starting civilization offer them as a commander.

Some of the most commonly used pairs at the current game but this doesn’t mean other pairs can’t be used. The order is random and does not rank the secondary commanders. 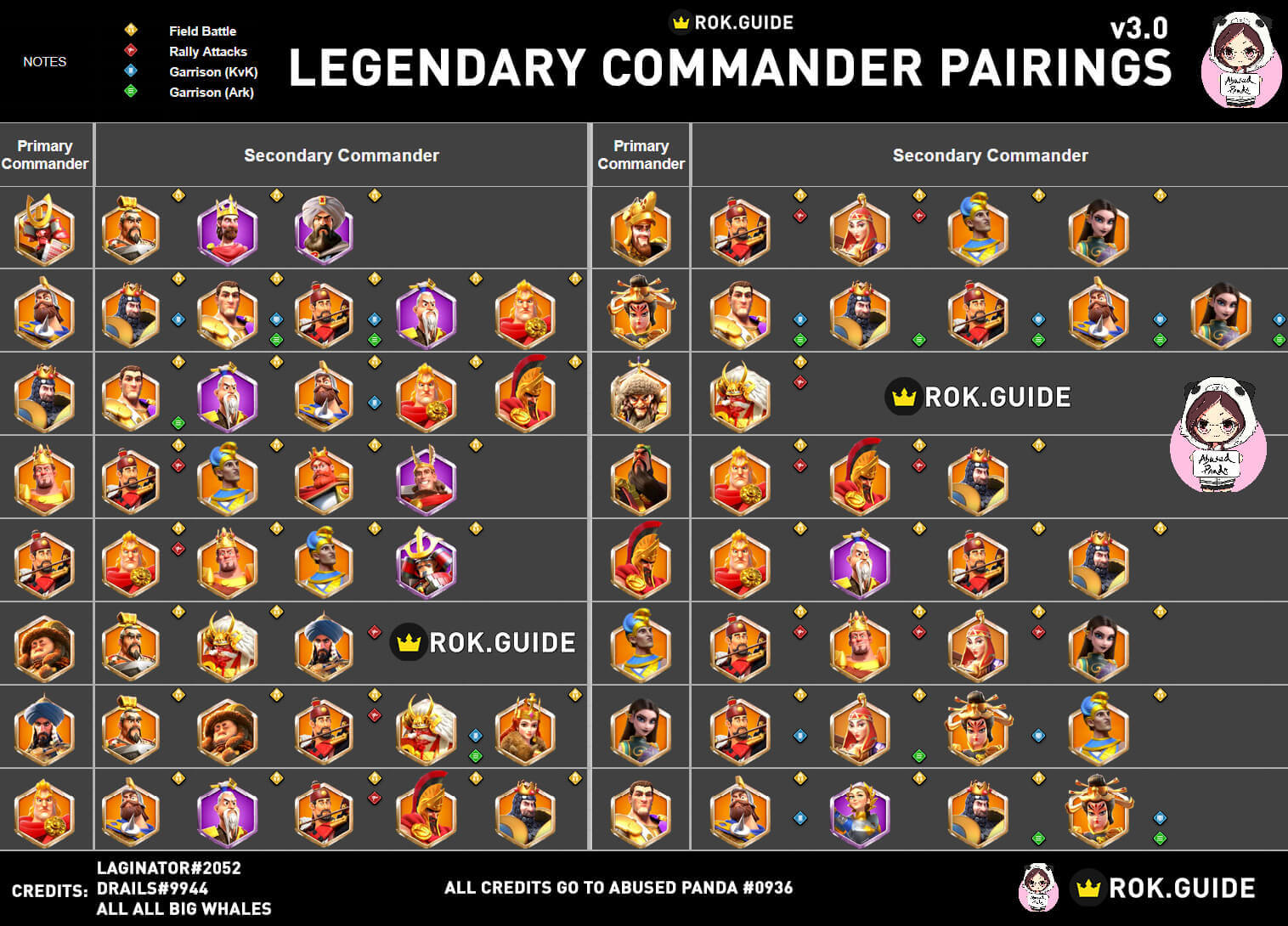 simonho has collected some of the best data out of those possible commander pairings for us. He has nicely converted all of the long data sheets into a very digestible graph, helping us browse and read the data a lot easier.

Below is the best form you could ever find for answering your “What are the best commanders to work with ____?” question!

See the Pen
Rise of Kingdoms commander pairings by thatguywind (@thatguywind)
on CodePen.

Only supports Browsers on PC at the moment.

How To Use and Read the Graph?