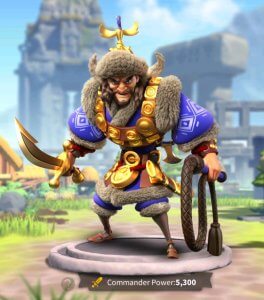 Other | The Scourge of God

Attila has the ability to become an incredible nuker, even though the third skill nerfs skill damage a little bit. If the 4th skill lines up and you’ve got the Expertise with the extra 20% increase, alongside the third skill triggering, you can pair him up with anybody.

Attila being kind of a hybrid with having some very significant buffs and debuffs. The third skill while making it looks like you really don’t want to pair him up with a skill damage commander, once you get to the fourth and the fifth skill, these are basically like having a bonus Sun Tzu in your army with the 20% damaged bonus.

The 4th skill is basically like having a boosted Eulji in your army. Instead of it just being for troop attack, it is for all damage coming out. It’s huge!

Attila paired up with Genghis makes a lot of sense. They are meant to work together! They are a perfect combination for those of you who want to really focus on Cavalry but also want to have the utility and the survivability of Infantry. If you pair these two up, the amount of troop damage that you’re going to be putting out is nuts.

You’re gonna lose some of the nuke damage due to the 4th skill here but you’re gonna gain so much sustainability from all the troop attack, the counter-attack, the defense bonuses, all the debuffs that are gonna be causing on your enemies. Not only those.

All the other troops that you’re gonna be using in your rally together really make you super tanky. All the damage you’re gonna be putting out are raw troop damage. It’s just really significant.

When you talk about a cavalry commander, we usually look for a massive nuking active skill. However, we don’t find it here in his first skill.

Increasing normal attack damage + counter-attack damage by up to 30% for 4 seconds is actually very huge. Reducing the enemy attack by 50% is massive.

This is really a pretty significant buff-debuff active skill in replacement of normally a nuke type skill for a Cavalry commander.

This is actually a pretty solid that is well designed to link into the conquering tree.

Attila is like the Cavalry version of Alex due to the combination of Cavalry + Conquering + Attack.

A really good damage boost and a defense reduction to the enemy.

This is like you’re boosting the first skill a lot more. The troop damage now gets boosted pretty significantly.

You’ve already reduced the enemy’s ability to damage you as effectively in the first skill. Now, here, you also apply more debuffs on the target.

The third skill this is the one that’s a little bit bugged right now and I will help you address it.

So you have a reduction for the skill damage taken, which is like Saladin’s and some other commanders.

The skill also increases Cavalry march speed by up to 15% and damage by up to 20% all the time. This is a huge buff.

That is a massive buff. And to the enemies, it is actually a little scary.

All damage dealt can be increased by a 100%. Can you imagine Attila being paired up with Genghis and his double nuke rockin’ off with this, that’s insane!

You have the potential to rally stuff with this second skill so if you’re gonna be rallying a garrison in general, that’s got Wu, you can’t be silenced. Same thing with Hermann. If you got a Hermann garrison somewhere, you’re not gonna get silenced.

Against enemy troops with less than 50% strength, all of the damage coming from Attila’s army gets boosted by 20%.