Artemisia I and Ramesses II are 2 new commanders, which are introduced in Rise of Kingdoms with the latest update called Spring Has Sprung. Artemisia will be coming out in the Mightiest Governor Event and Ramesses II will be in the Wheel of Fortune. 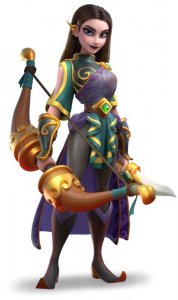 Other | Queen of Caria

First thought: I think if you are really hung up on archers and If are excited to have an Archer commander that is a very tanky, and is great at defending, Artemisia will be a great choice!

For Artemisia, you do want to have a high health bonus because she has self-inflicting skills damage.

Medicinal Supply: I am not adding Testudo Formation because it is going to be an RNG base. There’s already a lot of RNG base with Artemisia skills.

We also don’t need marching speed If we are defending so that’s a waste of a talent.

Instead, we’re actually going to increase her attack and heal and get to the Medicinal Supply directly.

One thing that you need to remember as a garrison commander is that healing not bad at all!

Imagine you’re getting rallied and you don’t have a lot of troops inside while people keep reinforcing. Having a healing in this case will preserve you as a captain and won’t kick you out because once a captain goes to zero, you’re gonna get kicked out and the next commander in there is going to be the one defending for the entire team, and mistakes can happen.

Venomous Sting: I went over to the right side of the Archer path because of this Venomous Sting increasing the active skill damage of a primary and secondary commander by 8%.

You can defend with YSG here as having double AoE is pretty scary.

You might see that is slightly similar to the one above but yet quite different because in this one we have added the Testudo Formation and we didn’t really go into the Phoenix-Tail Arrows.

In the open field, you’re going to be a target, which is you’re getting normal attacks a lot. If you proc that 10% chance, it will reduce all the damage taken, which is pretty crazy.

I wish I would have added more points for Medicinal Supplies here but 200 healing factor is already okay because it is enough to negate the 300 damage factor from her active skill.

Best commander to go with Artemisia when you want AoE damage.

Simple combination but super effective. Use Ramsey as the secondary commander and this is going to be a very tanky pair because of the defense tree of Artemisia combining with Ramesses skills.

If you are looking into open field battles, you can couple her with Tomyris and the silence would be really good because it’s going to delay the poison stack of Tomyris. You can definitely yes Artemisia as the primary commander because of her tankiness.

Have fun with Artemisia!