In this article, we are giving you the best strategies to win Ark of Osiris in Rise of Kingdoms bonus a lot of exclusive tips that help you and your Alliance can get those rewards with ease!

This is indeed one of the most interesting game modes that you should never miss. It features everything the game has: Teamworks, real-time strategic battles, and most importantly is that you won’t lose any resources or items when participating in AOO!

Below we have 5 best working Ark of Osiris strategies, 3 quick but super-useful tips, the best combination of AOO skills, and the best commanders you want to use in this game mode!

Tip: Play Rise of Kingdoms on PC helps you manage the situations and win the battles a lot easier! 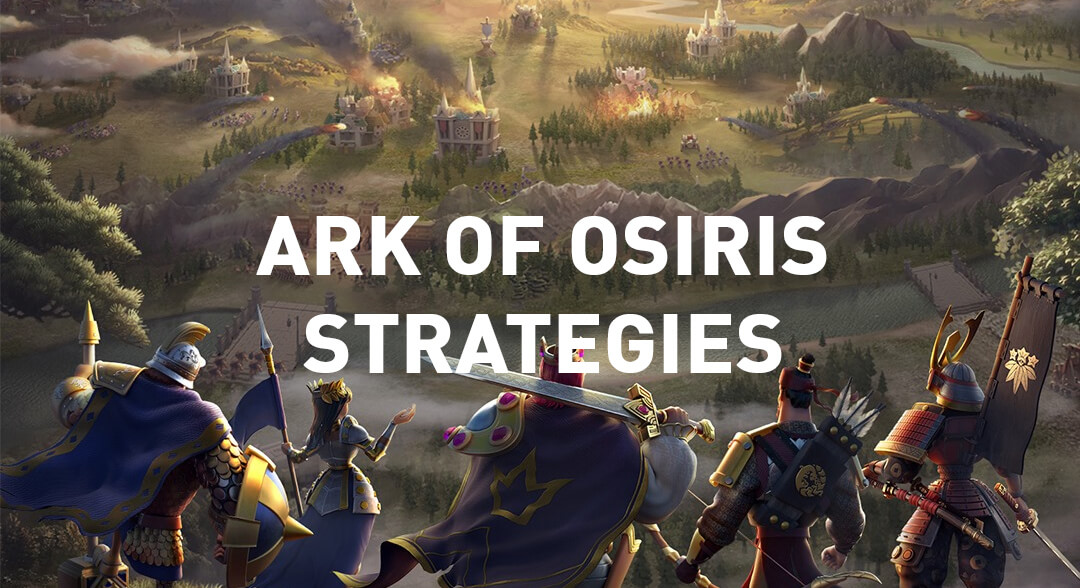 A lot of teams can get 13,000 points by using this strategy only, which is worth almost as much as 4 Arc of Osiris captures!

There are some reasons why this strategy is working very well lately:

You still have to do some other things besides provisioning: Pick if your team is going for buildings or Arks.

One of those two things is necessary in order to win with the provisioning strategy.

This strategy is very new and  can really catch your opponent off guard.

It’s recommended to turn into provisions in the final minutes of the match and you can score an unbelievable unexpected amount of points!

Send a large number of marches to the Shrine of War as the starting point then come through the Desert Altar, then try to take the  swing around the back of the Ark!

Or you could go through your Desert Altar to their Shrine of War if you want to have the stats rather than the point-scoring building.

That’s the core idea behind this strategy.

Both of those strategies are great but a lot of people use this strategy through the Shrine of War to the Altar because: 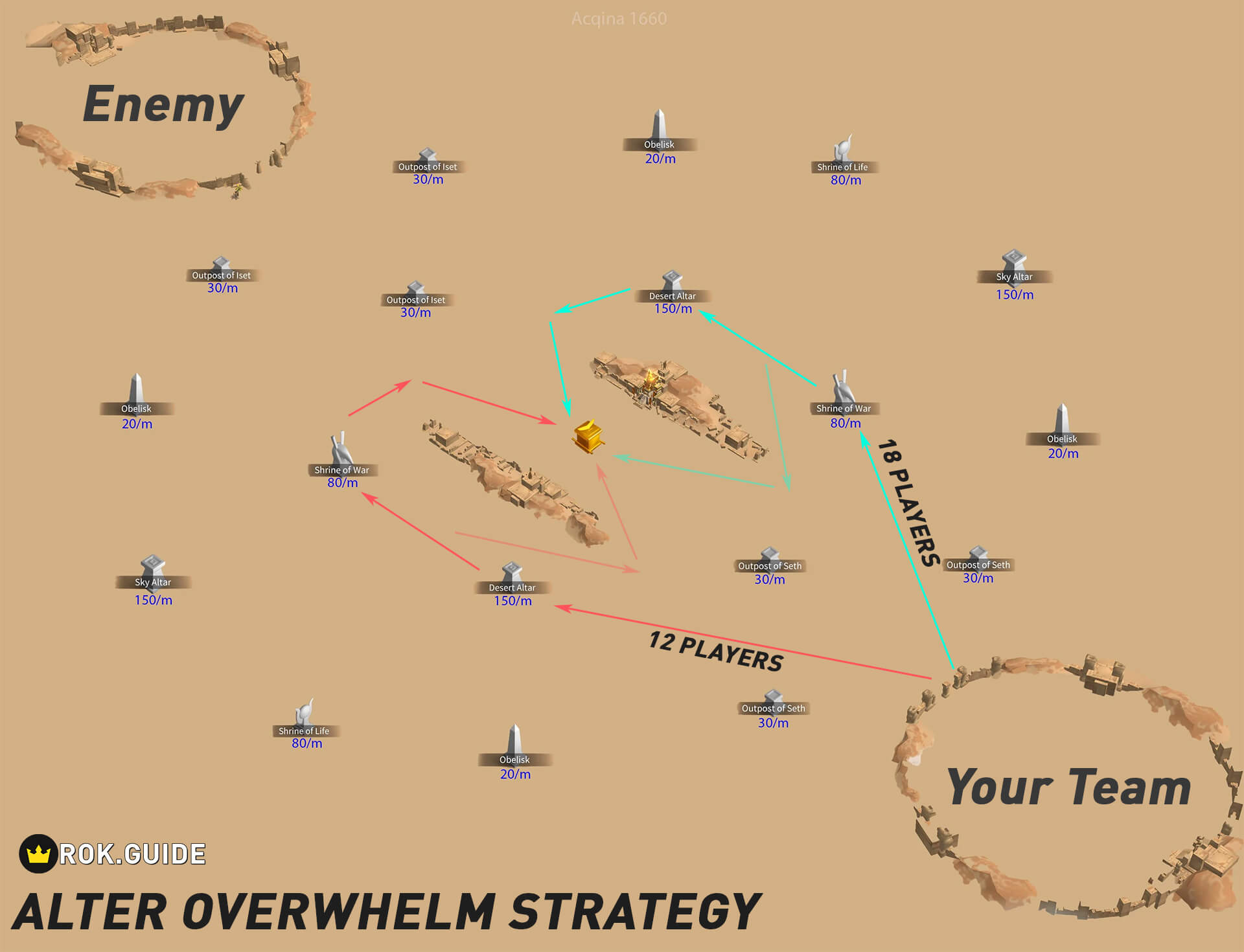 The worst-case that happens is when you don’t make it past the enemy Desert Altar. Or even worse, the enemy meets you between the Desert Altar and Shrine of War. You can try to battle over here for a bit before both sides end up swinging around the sides and going to the temple area.

This strategy protects your structure and surges forward to their structure. If they’re weak there, you can use that overwhelming presence to go take the Ark!

One tip to do this successfully is to have more players onto one side. Instead of having an even split of players, you might have 18 players on this side 12 players on the other side. That makes the strategy a good bit more powerful and quite effective!

The reason I like this strategy is that the inside lane is so close to the temple area so it’s very easy to change the strategy, adjust to the Ark and help your team get some points!

This strategy is less popular.

If the enemy is so strong and they have more players towards the inside lane, you can go to the outside lane instead where they’re weakest and overwhelm them there!

Send your players to the outside lane through either the Shrine of life to the enemy Sky Altar for the higher point scoring building. Or you can go through your Obelisk, through your Sky Altar to their Shrine of Life. 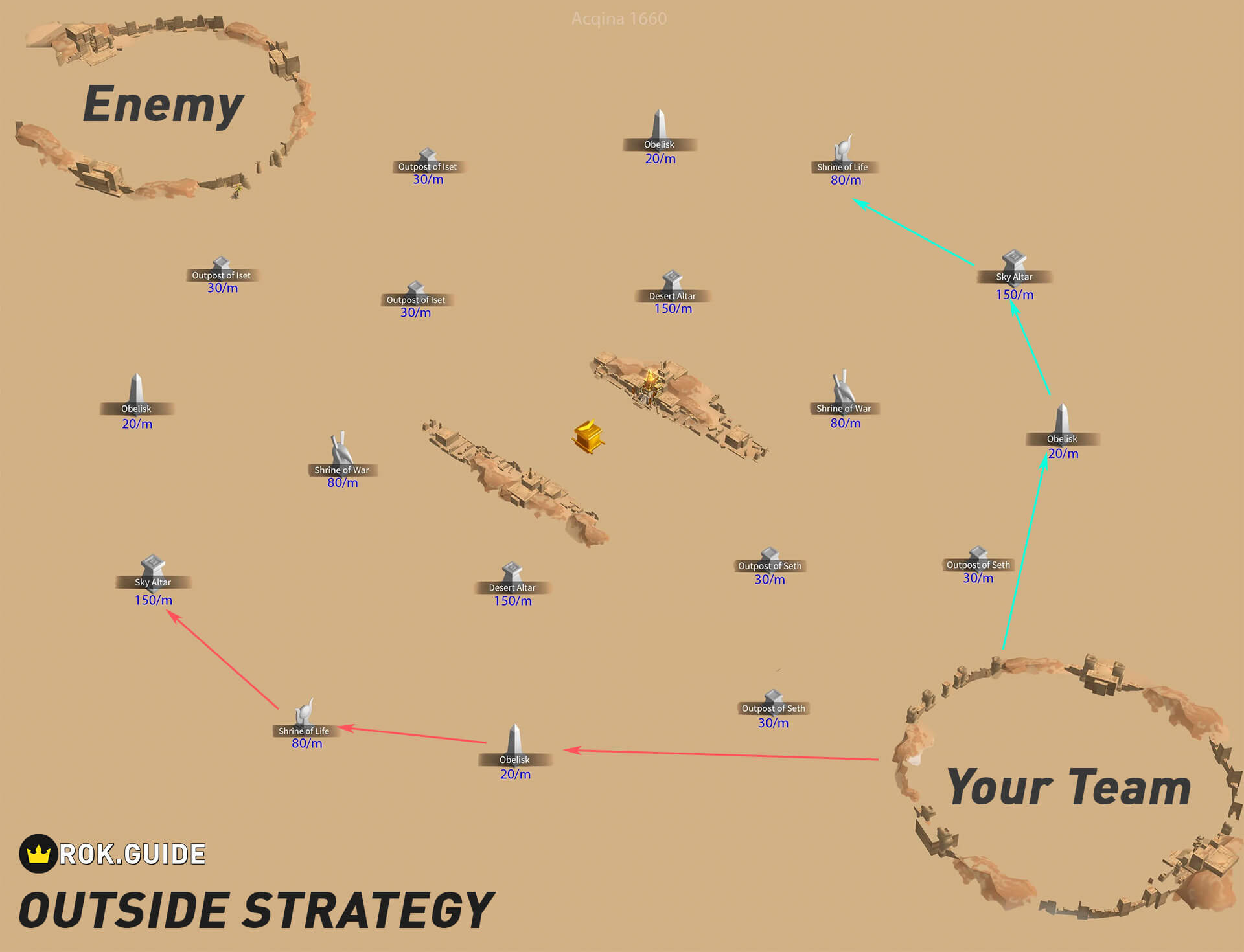 The advantage of this strategy is that teams are concentrated on that inside lane so you have the opportunity to have an easy time overwhelming them in the outside lane!

The worst case that happens is if you’re going through your Altar then you meet them in the middle of the field, you can defend your altar or your Shrine of Life. It’s not the end of the world.

This strategy is not as popular because the distance from the outside lane is much greater when you want to go and support the temple area. You have to do a lot of traveling!

The outside lane strategy combined with provisioning is a pretty smart and unique combination.

Defensive Strategy for Ark of Osiris

Another strategy you could use is to not even going to push forward! Just hold the line and try to just hold the structures.

This strategy actually allows you to win by taking the Arks.

You want to go even on buildings and take the Arks to win. 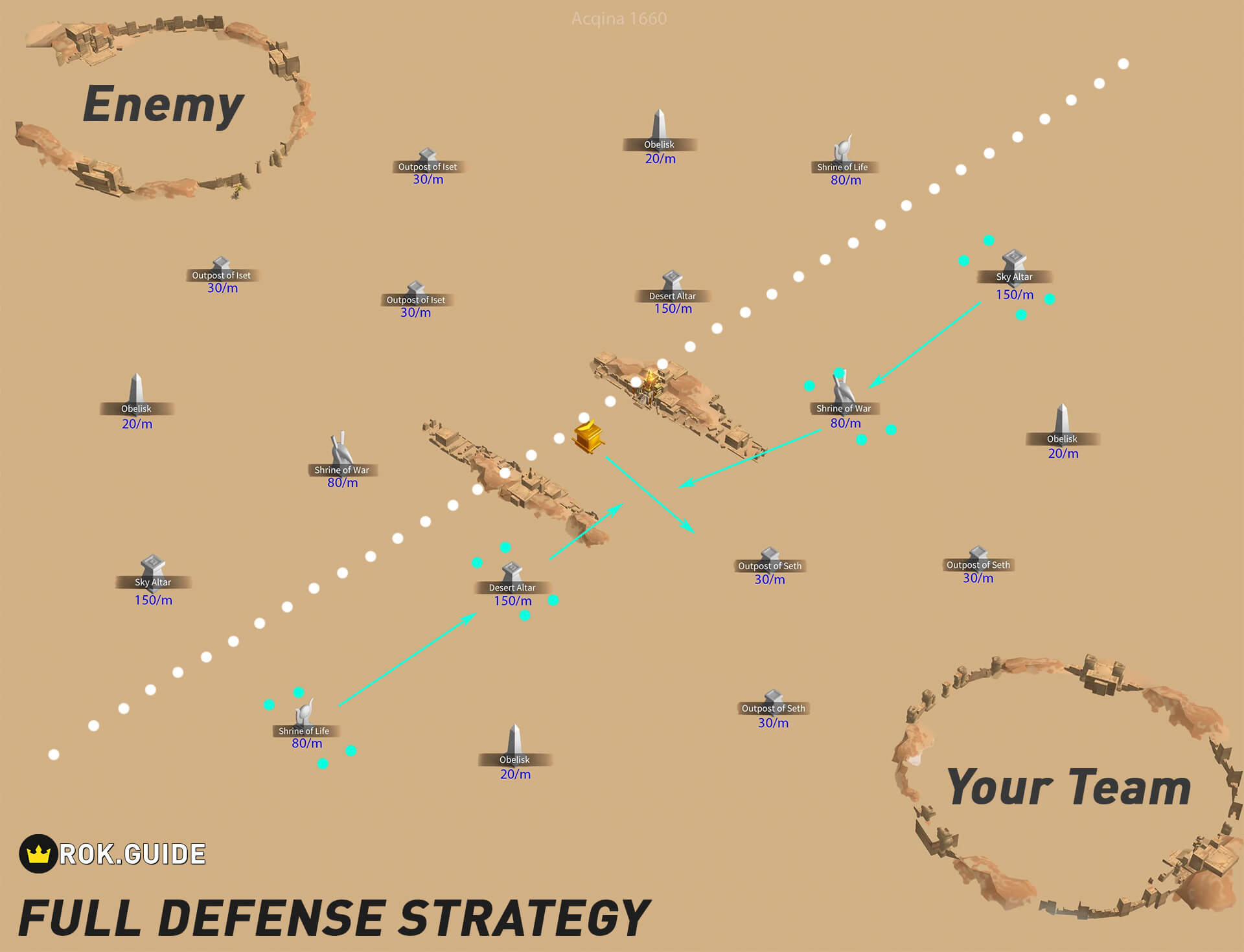 You might lose some buildings while you take the Ark but you ensure you go all-in on that Arc of Osiris to get those huge points!

I don’t love the defensive strategy because one really bad break-away from the Ark Carrier could bring that Arc to the enemy side and you now have a lot of extra distance that you have to march to protect it.

Rally Enemy Obelisks on both sides

Send out 4 rallies to 4 Obelisks at once!

When rallying your own Obelisks, you want to send super-fast cavalry marches like

. When they get to the Obelisks, switch the captain to a proper garrison captain like

to properly defend the structures until more of your forces arrive!

If you end up catching the enemy off guard, you could take their Obelisks and that’s a really bad situation for them!

If something bad happens, yoou always can cancel the rally to protect your Desert Altar or to assault their structure instead. 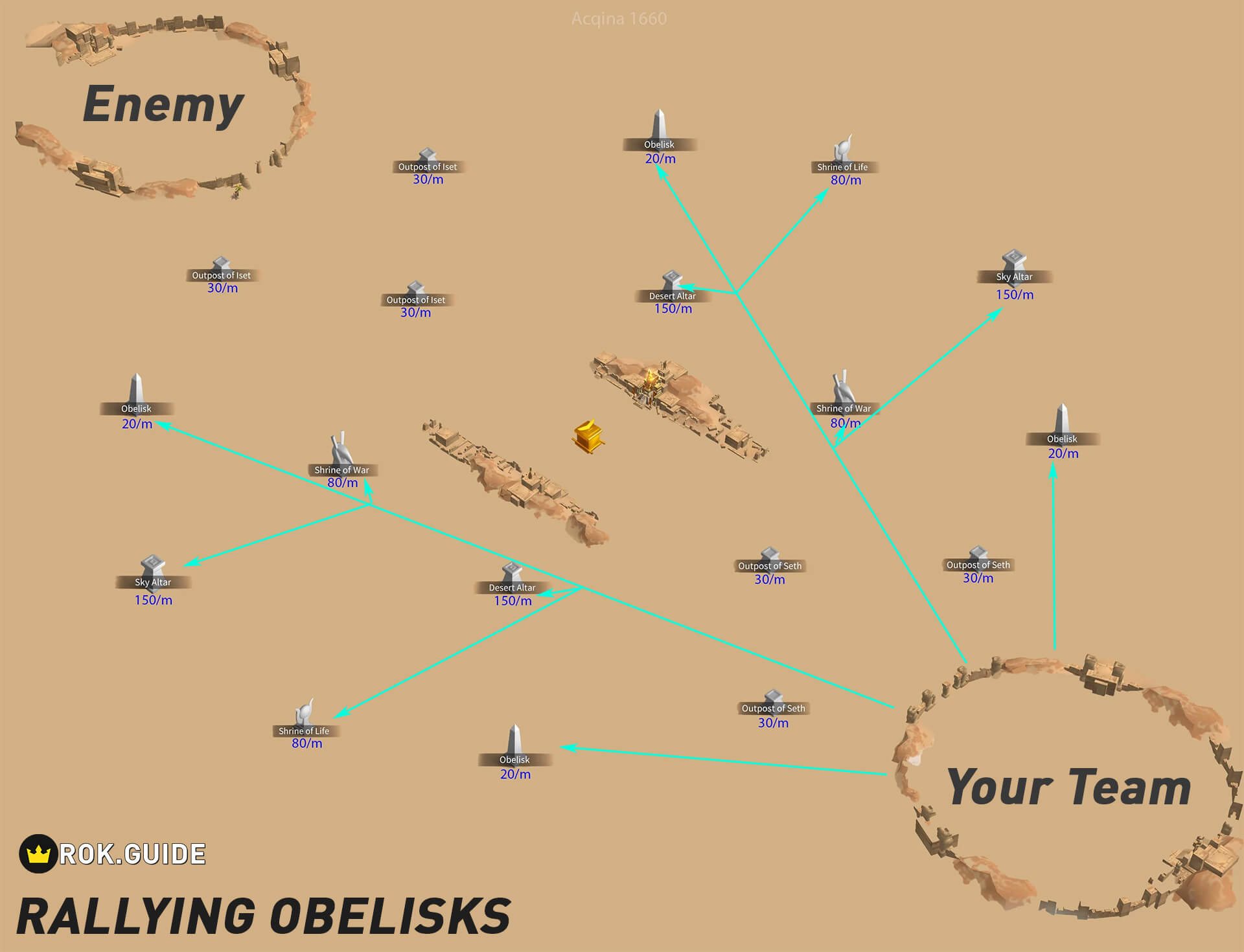 Sometimes people do a swap to the outside lane and attack something that’s higher point value like the Sky Altar or something less defended like the Shrine of Life, depending on the strategy and the situation.

You have a huge amount of flexibility by launching the rally on the opposing side Obelisk.

Use all cavalry for that rally if you want speed. Most teams these days are using Infantry to get some really powerful marches downfield!

Holding the Ark of Osiris?

If your team take the Arc of Osiris you get a breakaway, you have a couple of options. 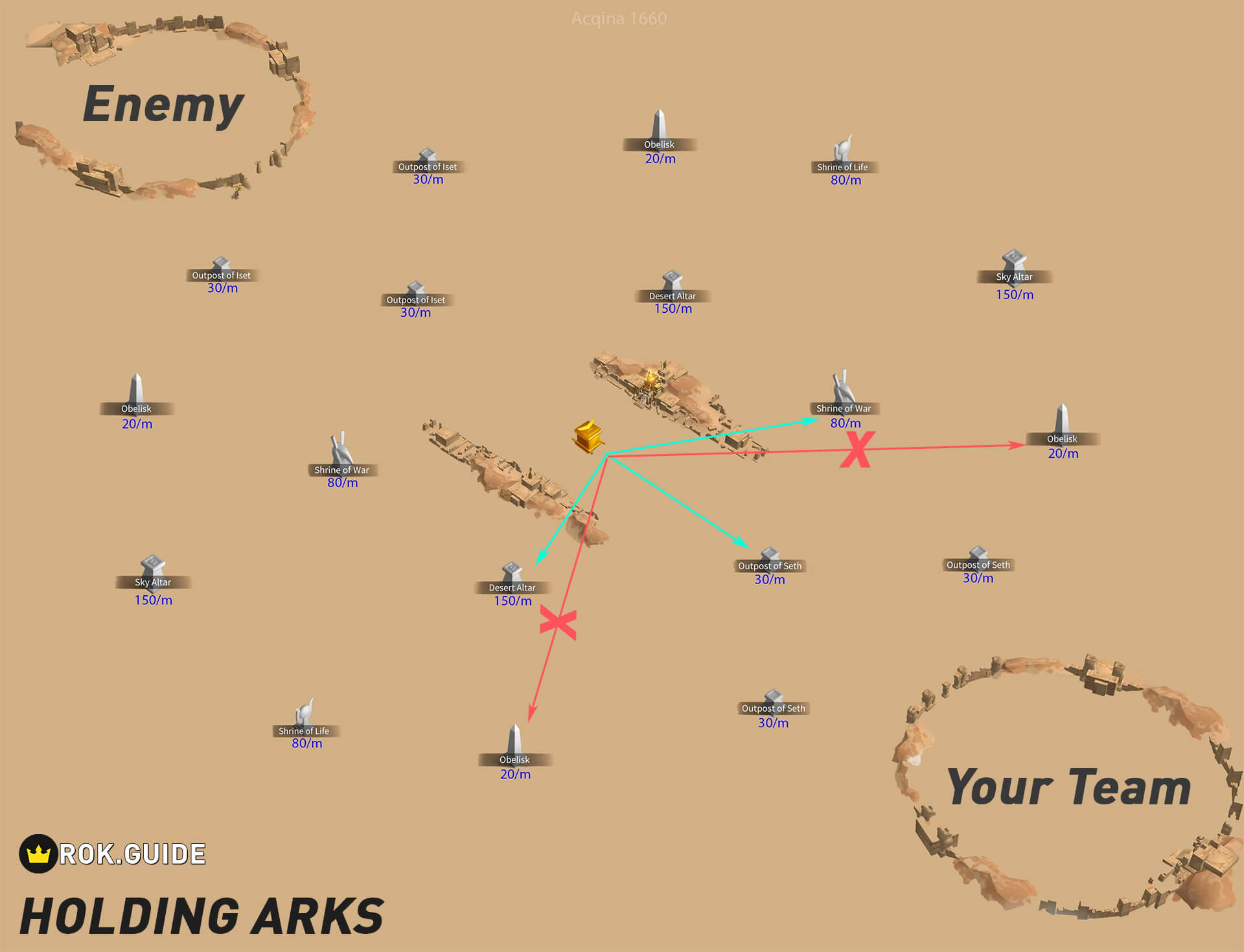 The one that I’m finding to not work in most cases is brining it to the Obelisk. The reason many teams are doing this is because they’re trying to get to safety to manipulate the holding time.

However, if you are holding Arks, you are likely the dominant force in the match-up.

But why don’t just capture as many Arks as you can if you overpower your opponent? Just roll them over every time in the temple.

Also, if you take it to the Obelisk, you might get a chance of losing it if the enemy is using the Outside lane strategy.

Holding the ark for too long is fraught with risk!

The outposs can easily score a huge amount of points in the battle. It’s a must to send super speedy marches back to assault these different outposts and rotate around all game long! 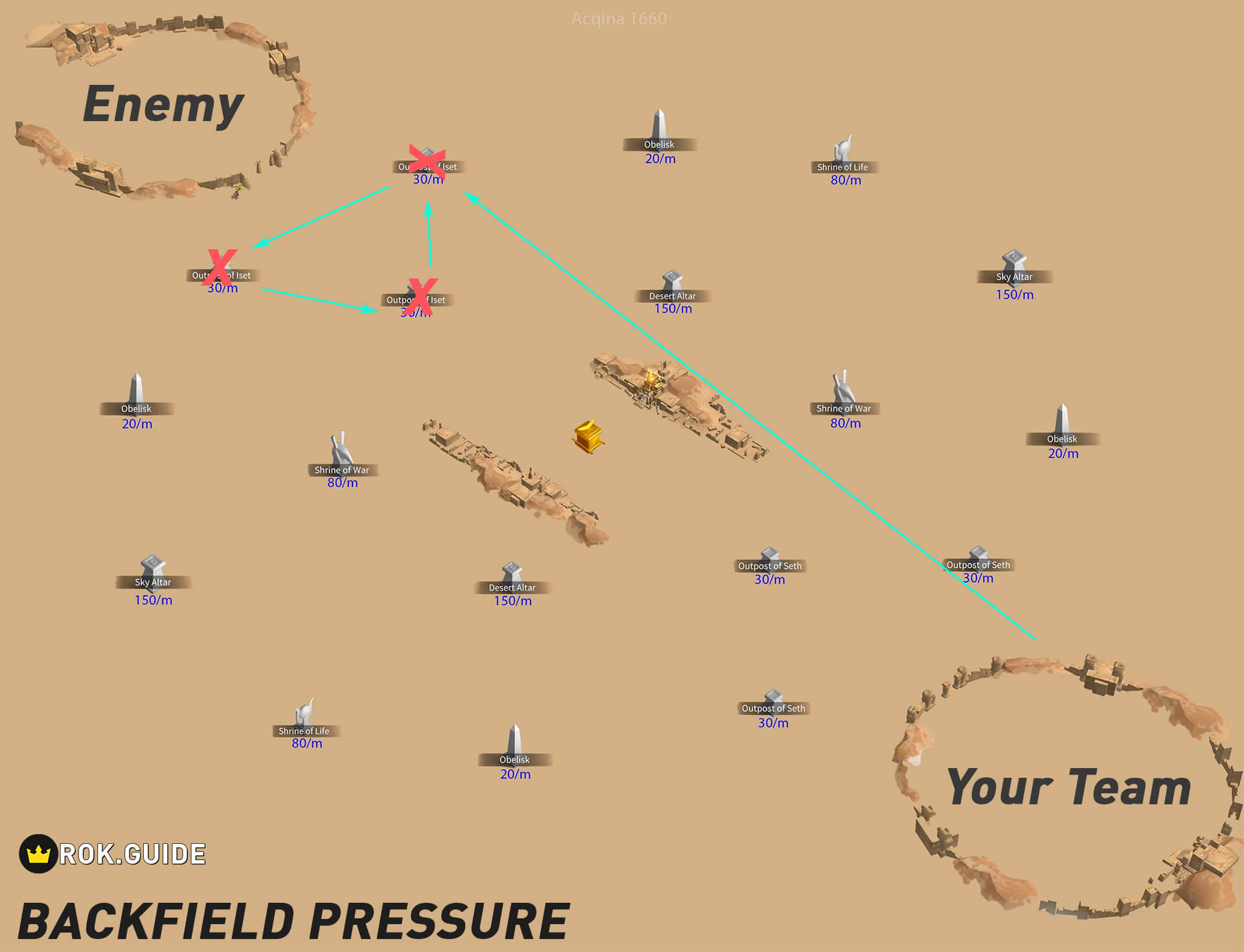 If you’re not doing this, it’s something I want you to start to think about! This is how you provide pressure to the backfield! These outposts are worth a meaningful amount of points!

In addition, you’ve got people caravanning here, go wreck them and there are chances that these caravanners are not ready to handle multiple marches bearing down on them. If you can defeat a caravanner which is actively farming, they lose all their bounty points!

any time that you can get your opponent to commit more marches to you do in any place on the map, you’re winning! It’s a positive trade!

Let’s say you launch a rally on the enemies Obelisk and you have 5 marches in that rally, if the enemy spends more than 5 marches defending then you’re winning that situation! If they send 7 marches to defend, you are net positive 2 marches on them!

One way that people usually do is to use the super disruptive backline forces, taking outposts and forcing the enemies to spend more marches to defend and run around chasing you. With just 1-3 marches, you can do so much work by just hitting the outposts.

Best Skills in Ark of Osiris?

There are some skills here that are incredibly popular and I’m going to briefly run through them and you can see why they are the best.

The best combo to me is the combination of

Swift Stride are great for the temple area, to capture the Ark and bring it home safely

Relentless Siege are not really being used much lately.

Mystical Formation at 2 energy are both really good! They offer astonishing amount of stats. Both of them are very very powerful and I strongly recommend that you use them. The mistake that is commonly made with these is activating the buff a little too soon or too late!

Valiant Stand allows you to be able to defend more effectively and gettinga lot of more points. The best way is to use it before the fight has even started and you need to be good at predicting when a fight is going to be really crazy and that enables you to commit less to defending to get the same outcome!

Divine Haste: None of these are really deployed in the meta!

Insatiable Desire is great for the Provisioning Strategy as it incrases the gathering speed of all alliance caravans by 50% for 5 minutes! That is an astonishing amount of points for 2 energ! It’s a steal!

Bog Down: It would not bank on getting value from the march speed but the defense reduction is good. However, I think it’s better to boost your own defense by 50%!

Desert Storm is something we’ve not seen used much.

Heaven’s Grace are not being used much.

Hurl Stone is great and getting used a lot lately!

To The Death is the shining star here. This is the all-in play that you can only do it once per battle but it’s very powerful!

For the full details of each skill, kindly go to our Ark of Osiris guide.

I really like the simplicity and effectiveness of this combination. Swift Stride increases the march speed of all alliance troops and this game mode is all about getting to the right place at the right time! Using this combo, you don’t have to worry about the speed!

Swift Stride makes everybody get to where they need to be faster and as long as you actually need to get there faster! That is value and in most cases you’re going to get a lot of value from this skill!

Best Commanders for Ark of Osiris

Below are some of the best commanders for Ark of Osiris at the moment.

For more details regarding top commanders for the other aspects of the game, kindly take a look at our Rise of Kingdoms Commander Tier List page!