In this guide you can find all of the information regarding Alexander the Great in Rise of Kingdoms: Skill information, talent tree, commander pairings and equipment recommendations!

Alexander The Great and Æthelflæd were released in the huge June 2019 update. 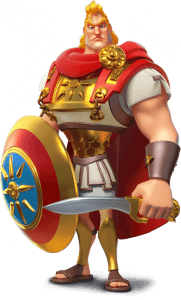 Alexander the Great is available in “Wheel of Fortune” from the 200th day of the kingdom, 3 times every 2 weeks and then joins the “Card King” event eventually.

In this build, we will explain what are the best advantages in the talents and skills of Alexander to have his shield in any battle.

As an infantry commander, he has talents: Versatility, Attack and Infantry, that is, we are in the presence of a commander purely oriented to improve his statistics of defense, attack and resistance offensively, however despite not having Defense talents like other great legendary in Rise of Kingdoms, this continues to be a robust commander.

“Shield of the King” is his active skill, when Alexander raises his shield he absorbs a certain amount of damage and in turn benefits the closest ally with the lowest percentage of troops remaining.

“Lead of Charge” an kill that makes us immune to damage reduction while we are fighting in Open Field, gives us a chance to inflict direct damage and in turn reduces the healing factor of any commander we attack, it is an excellent skill.

The infantry is slow, however, “Frontline Commander” will make this a fast unit in Open Field, it will also increase its attack, both bonus + 30%.

“Battle of Chaeronea” is his 4th skill that has two ways of use, while his shield is raised it will increase our defense by 30%, after it falls our units will gain 40% more attack.

His ultimate skill improves his “Shield of King” affecting nearby enemies (up to a maximum of 3) and they will receive 30% more damage for 4 seconds.

From his first skill to the last, they are all important, Alexander is an excellent commander to which we must dedicate our Golden Sculptures if we are looking for a true leader within Rise of Kingdoms, for them we must also have strong talents that will be explained below:

Alexander will be able to face any enemy on the battlefield, he is a great commander in open field even defending structures due to his great ability to absorb damage, but he does not have “Defense” or “Garrison” talents as we have explained. This build is focused on open field where its performance is special.

If we choose Alaxander to defend structures or cities, he must be a secondary commander for the use only of his skills that will increase the statistics of his garrisoned units and will support his primary commander, this if he must have talents of “Garrison” or “Defense”, of this way we will have an absolute defense thanks to the perfect balance and strength of Alaxander the Great.

We will only have a fixed Build to suit everyone and our recommendation. Alexander is an offensive infantry commander.